Irish Song Lyrics And Chords From C To F In Titles

All the guitar chords that I use on the site have being set up for chordpro. 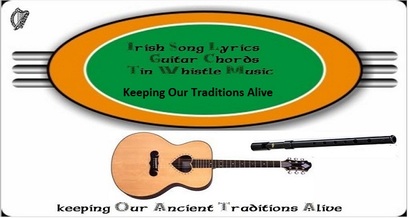 Irish Drinking Songs.
One of the most popular themes that give inspiration to songwriters is  Ireland's love affaire with drink. While placing the lyrics and chords to on this site it never really struck me how many songs actually deal  with the subject. There must be a couple of hundred so called Drinking Songs here. Generally the Irish people call these songs ''Ballads'' as opposed to other countries who use the term Drinking Songs. Generally these songs start out as love songs but with the love of drink being second nature to the Irish, whiskey or beer will enter the song at some stage.

These songs don't represent all of the people of Ireland but they certainly  represented a large proportion. These kind of songs also provide an outlet for people to discuss some sensitive  subjects in times past, it's like dealing with reality and masking the subject at the same time. Perhaps it's to do with our Catholic upbringing that certain subjects never got an airing unless it was through song. And lets not forget that like the poets of old who used opium for inspiration, the same goes for songwriters who have written some of the greatest songs while under the influence of alcohol. Well one does think outside the box when drunk. The writing of these drinking songs has not diminished in any way, Seamus Moore has based his singing career out of mostly songs about gargle. Music and drinking have always gone hand in hand for the Irish as we celebrate our national pastime.

There have hundreds of songs that acquired  the label as drinking songs but are in fact simple folk songs like Spancil Hill, She Moved Through The Fair, Old Maid In The Garret to name a few.  I have seen them placed in song books and record albums for the simple reason of selling their products. Then over time people assume that ''All'' folk songs are drinking songs.

Have you ever bought an album that says The Best Irish Drinking Songs Ever. Well there are 100's of albums around that suggest that, but the reality is that when you bring it home and play it you soon discover that the contents of the album are not what the front cover says. I have been buying so called ''Irish Drinking Song'' vinyl records then tapes, then compact discs for over 40 years. A good catchy title on any product will sell that product and putting a title like Best Ever Drinking Songs will increase sales of that album especially if it has a picture of Guinness or some other drink. Here are the sleeve notes of an album that was brought out in 1969 by Hallmark Records and features 12 so called Drink Songs, but only 6 are related to booze while the other 6 are general folk songs.


Drinking songs from Ireland was an album by Joe Lynch and The
Hibernians. Here's what the sleeve notes say. Here in one glorious
collection are the famous drinking songs of Ireland, sung by master
entertainer Joe Lynch. Through them all you'll feel the real magic, the
true friendly spirit of the Irish scene, from the boisterous
outrageous Finnegan's Wake to the gentle sadness of Whiskey On A
Sunday. From the universal appeal of Little Brown Jug to the rare
collector's item Cruiskeen Lawn, which in English means 'The Full
Little Jug'.

As you listen to The Jug Of Punch it will conjure up for you the
atmosphere of evenings long ago, round the friendly warmth of an
alehouse fire. A beautiful rarity is the centuries-old Irish drinking
poem Preab San Ol which is sung here in the original language of
Irish. The title defies exact translation but it tells of the little
kick one gets from drinking.

Two happy rollicking songs The Moonshiner and Wild Rover No More,
although they both have a different to drink, are each given a fair
hearing. For good measure, Joe Lynch leads the company in two songs
which are not directly related to drinking, The Old Rustic Bridge and
The Rose Of Tralee, but they evoke the gentle nostalgia of the best of
Irish pub singing.

To a pleasant evening, the singers relax and the instrumentalists take
over in two traditional Irish dances, The Temperance Reel and The
Slainte Jig Selection. All in all, as happy, as lively a collection of
drinking songs as you'll ever hear. Enjoy yourself . End Of Sleeve Notes.


While the album above is a fine selection of songs and I was fond of listening to Joe Lynch And The Hibernians, it's the title the record companies place on the albums that get on my wick.

There have be many more albums that were brought out from the early 1960's up until the present day that state they have the finest Irish Drinking songs. Most of the early Dubliner's albums used drink to sell their songs. Don't get me wrong, I have nothing against gargle, in fact to prove the point I have drank over 4 lorry loads of Smithwicks in the last 40 years [ Yes I Calculated it one night with my barman ].


If you are looking to get your hands on a couple of albums then there are 2 I suggest. The first is called  40 Irish Drinking Songs An Irish Pub Singalong by The Jolly Beggarmen which is a live recording in a pub. It's the finest live recording of any of my 100's of albums I bought over the last number of years. If you never heard of The Jolly Beggarmen then you'll have to take my word that they were one of the top ballad groups doing the rounds in Dublin for many's a year, alas most of them are now in Heaven having a mighty session with The Dubliners and The Clancy Brothers and Tommy Makem.

The second album that I recommend is 60 Greatest Ever Irish Ballads by Dolphin Records. All the top names in the Irish folk scene over the last 50 years are on this album singing the best 60 songs ever to come out of Ireland.
So why am I recommending these couple of albums ? A few years ago I was left over 20 compact discs by a relative. On each of her visits to Ireland she bought a few albums thinking they were great Irish songs and they turned out to be all ''Traditional Music'' which she's not into. All the covers of the albums had nice pictures of bands preforming on stage which looked like they were having a great time singing songs. They were in fact playing trad. music. So she had spent a couple of hundred pounds buying records that were of no use to her as she really wanted was old folk songs. I blame the record companies for falsely labelling c.d'  as The Best Irish Music and the like. Below is the second Compact Disc I recommend. 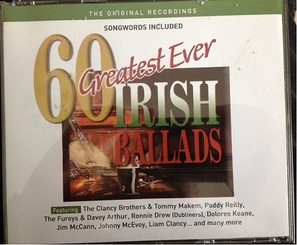