Erin Go Bragh Guitar Tab now added. This Irish rebel song is about the events that took place during the 1916 rising in Dublin. Other songs about the Easter Rising .Written by Peadar Kearney and Recorded by The Wolfe Tones. The sheet music is included. I have given the guitar chords in two keys. The first is the easy version in Am and the second is in the same key that The Wolfe Tones play the song in which is Cm. The tin whistle notes are included and were worked out by Jean-Baptiste Meynard. The youtube video is of The Wolfe Tones. An Irish rebel song.
I'll [Am] sing you a song of a [G] row in the [Am] town,
When the [C] green flag went [Am] up and the [G] Crown rag came [Am] down,
Twas the [C] neatest and [G] sweetest thing [Am] ever you [C] saw,
And they [Am] played the best [G] games played in [C] Erin Go [Am] Bragh.


One of our leaders was down at Ring's end,
For the honor of Ireland to hold and defend,
He had no veteran soldiers but volunteers raw,
Playing sweet Mauser music for Erin Go Bragh.

Now here's to gallant Pearse and our comrades who died
Tom Clark, MacDonagh, MacDiarmada, McBryde,
And here's to James Connolly who gave one hurrah,
And faced the machine guns for Erin Go Bragh.

One brave English captain was raving that day,
Saying, "Give me one hour and I'll blow you away,"
But a big Mauser bullet got stuck in his jaw,
And he died of lead poisoning in Erin Go Bragh.

Old Ceannt and his comrades like lions at bay,
From the South Dublin Union poured death and dismay,
And what was their horror when the Englishmen saw
All the dead khaki soldiers in Erin Go Bragh.

Now here's to old Dublin, and here's her renown,
In the long generation her fame will go down,
And our children will tell how their forefathers saw,

Here are the tin whistle notes along with a youtube video by Jean Baptiste Meynard
The bold letters are the high notes.
I'll tell you a story of a row in the town, -> B B E E B D A F E D E
When the green flag went up and the Crown rag came down, -> E F G E G F E D B C D E
'Twas the neatest and sweetest thing ever you saw, -> E F G E G F E D B A B D And they played the best games played in Erin Go Bragh. -> D E B B D B G A F D E 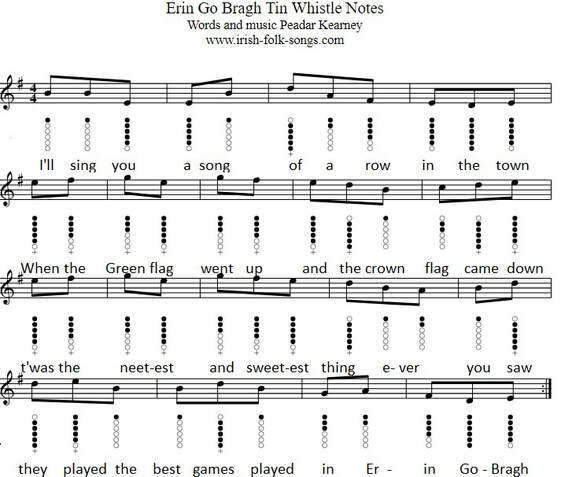 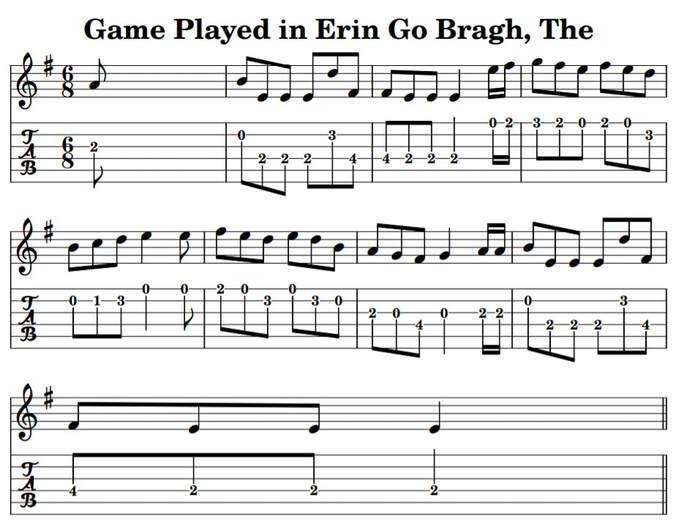 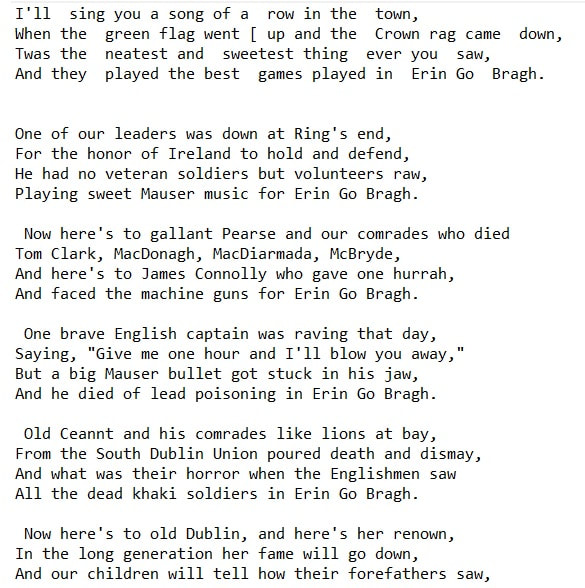