Christmas In The Trenches Guitar Chords And Lyrics

The sheet music and an mp3 is included plus the tin whistle notes. Written by (John McCutcheon) music time signature 4/4 , guitar work by Marc. This Christmas song was born out of the first world war when German and British soldiers called an unofficial truce for a few days at Christmas. There are many songs dealing with this period and this one is about a young man from Liverpool in England who ends up in France fighting for king and country. In the middle of the battle a silence hung over the battlefield and German and British troops exchanged gifts and sang Christmas songs. The singer in the youtube video is the songwriter John McCutcheon.
My (D)name is Francis (Bm)Tolliver. I (G)come from Liver(Em)pool.
Two (A)years ago the war was waiting (G)for me after (D)school.
To Belgium and to (Bm)Flanders, to (G)Germany to (Em)here,
I (A)fought for King and country I love (D)dear.
It was (A)Christmas in the trenches where the (G)frost so bitter (D)hung.
The (Bm)frozen fields of (F#m)France were still, no (G)Christmas song was (A)sung.
Our (D)families back in (Bm)England were (G)toasting us that (Em)day,
Their (A)brave and glorious lads so far a(D)way. 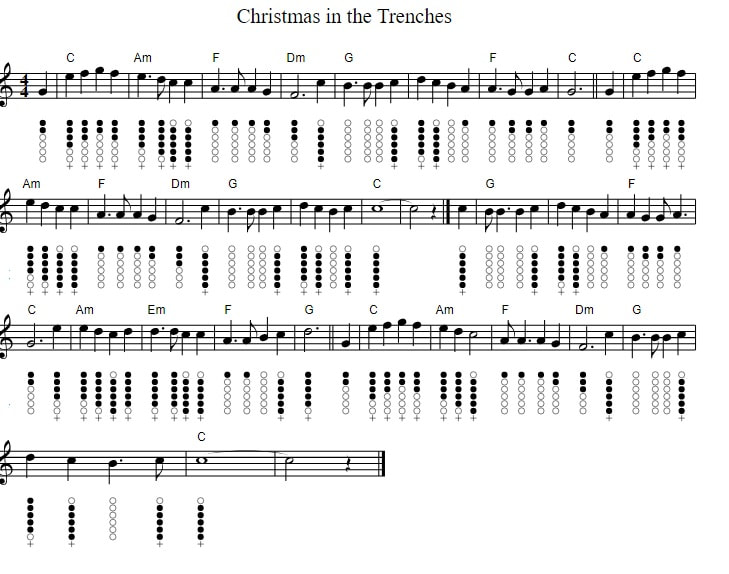 Christmas in the trenches sheet music and tin whistle notes 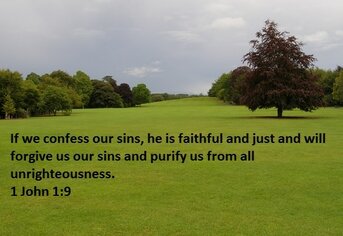 My name is Francis Tolliver. I come from Liverpool.

Two years ago the war was waiting for me after school.

To Belgium and to Flanders, to Germany to here,

I fought for King and country I love dear.

It was Christmas in the trenches where the frost so bitter hung.

The frozen fields of France were still, no Christmas song was sung.

Our families back in England were toasting us that day,

Their brave and glorious lads so far away.

When across the lines of battle came a most peculiar sound.

Says I "Now listen up me boy", each soldier strained to hear

As one young German voice sang out so clear.

"He's singin' bloody well you know", my partner says to me.

Soon one by one each German voice joined in in harmony.

The cannons rested silent. The gas cloud rolled no more

As Christmas brought us respite from the war.

As soon as they were finished a reverent pause was spent.

The next they sang was 'Stille Nacht". "T’is 'Silent Night'" says I

And in two tongues one song filled up that sky.

"There's someone commin' towards us" the front-line sentry cried.

All sights were fixed on one lone figure trudging from their side.

His truce flag, like a Christmas star, shone on that plain so bright

As he bravely strode, unarmed, into the night.

With neither gun nor bayonet we met there hand to hand.

We shared some secret brandy and wished each other well

And in a flare-lit soccer game we gave 'em hell.

We traded chocolates, cigarettes and photographs from home

These sons and fathers far away from families of their own.

Young Sanders played his squeeze box and they had a violin

This curious and unlikely band of men.

Soon daylight stole upon us and France was France once more.

With sad farewells we each began to settle back to war.

But the question haunted every heart that lived that wondrous night

"Whose family have I fixed within my sights?"

It was Christmas in the trenches where the frost so bitter hung.

The frozen fields of France were warmed as songs of peace were sung.

Had been crumbled and were gone forever more.

My name is Francis Tolliver. In Liverpool I dwell.

Each Christmas come since World War One I've learned it's lessons well.

And on each end of the rifle we're the same.

Return to Lyrics And Chords C-F 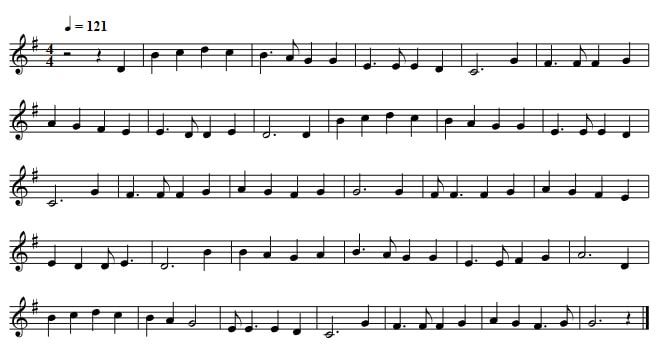 Christmas In The Trenches Sheet Music Notes In G Major