Irish folk song.- I have no idea who wrote this mighty Cork song, no chords at present.

Montenotte and St.Lukes they might attract your looks
Fair Lane, Barrack Street and Evergreen
From the courthouse to the college
They teach diffetern sorts of knowledge
And yet half of Cork you have not seen

In the merry month of June, at the rising of the moon
As we strolled up Shandon Street to Blackpool
Where they have medals by the score, won eight counties in a row
So here's to the boys of sweet Blackpool

Tipperary, Limerick, Clare, all mighty hurlers there
But break they all upon the rocks of Clyne
Where our darling hurlers roves, deadly terror to his foes
Pay tribute to Cork's own Christy Ring

Although he's fairly small, he's the greatest of them all
And his fame in every county is wide-spread
And a little God he is on the north side of the Lee
Barrack Street and Evergreen now bend the knee.

And now before we finish, we'll have a pint of Beamish
Murphy and Guinness is good too
But I'll never forget the oil
That I met with Connie Doyle
On the night we won the county cup.
​
Lyrics an chords C-F 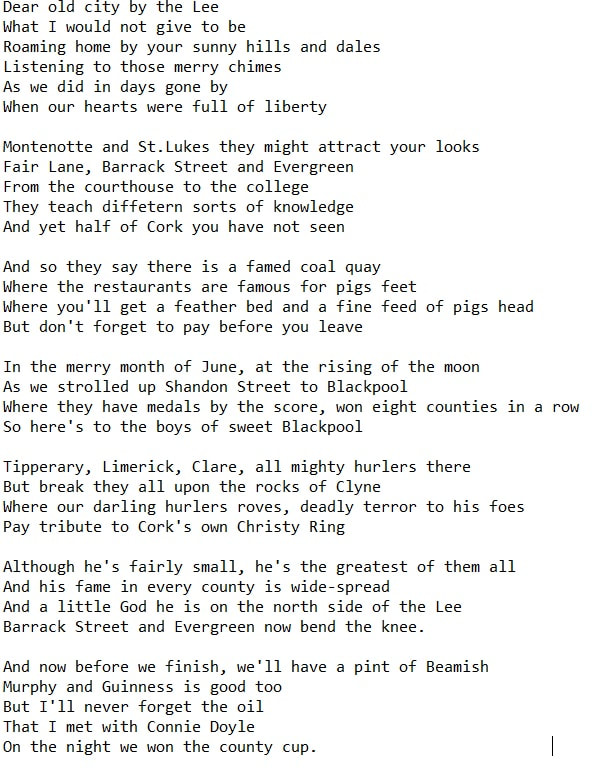