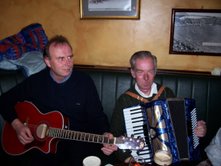 email unitedireland@gmail.com
The only reason this guitar and lyrics site is here is to keep the Irish tradition of singing and playing music alive and kicking ,since I started back in March 2004 [this site] I have received hundreds of requests through email and the guestbook for songs , most of which I have provided and are on the site , the others I have emailed on to the people who requested them.
I don't get many requests for chords any more, that's a good thing and shows that I already have most of them here already

This is a LIVE site , probably the only one of it's kind to accept requests and for the webmaster to try work out the chords for visitors.


What do I play ? mostly guitar, a bit of banjo and tin whistle.
Where am I from ? Co. Dublin Ireland

Collecting Irish songs and promoting them is a passion with me
I wrote the songs called  Thomas Ashe also the song called ,The First Tuesday both are on the site
The site receives on average 12000 visits a day. and has now reached the 30,000000 million mark as from December 2014.
It has helped thousands of guitar players of Irish songs, I know this because of the amount of emails I receive


The design  evolved through trial and error , I keep the layout simple and easy to navigate , This is a user friendly site, avoid sites with pop ups ,as they are bad for your computer, the guitar chords are kept very basic, mostly three chords, If you came here looking for Boyzone or Westlife lyrics and chords, then you came to the wrong place, sure them boys don't even know the chords themselves.

Recently I started collecting general folk songs from around the world, especially from England, America and Germany which has a rich culture in folk songs.
Acrylic Painting By Martin Dardis
Have Your Song Published Here
If you have written an Irish song or even a folk song and want it published here just send it to me at the email address, lots of novice and established singer songwriters already have, if you have chords or sheet music for your song send it also and any background information that might be of interest Keep the chords easy.
Why Don't  Irish Radio Stations  Play Our Songs ?
Well that question has puzzled me for years, I live in Dublin and if you were to hear even one of the songs I've on the site in a month you be lucky. There are radio stations for every brand of music here in Ireland except Irish.
I'm involved in several Irish music discussion boards on the net and if for example if The Wolfe Tones songs get gets  on radio it's a big deal with the board members at The Wolfe Tones site, they want to know what radio station played the song, what D.J what time etc.
It should not be like this, our music has been handed down through the generations at sessions, open houses, crossroads dances and so on.

Things have moved on, I can only speak about Irish t.v and radio here, I've been told in Canada Irish music gets huge airtime.
If it was left to the big Irish stations then our songs and stories would have died a death years ago because all they play is non stop hip-hop, rap, and nonsensical  pop music with no social value.

Folk songs tell a story, you can learn a lot from an old ballad, you will get an insight into the social history of your country by listening to it's folk/ballad songs. I'm sure most of you have been to YouTube to watch the songs, look how many hits the songs get. There are some old folk tunes there that have gotten a few hundred thousand hits.
It's sad when we have to go on the internet to listen to our own songs.
Shame on the radio stations in Ireland that won't play Irish songs.
Are Rebel Songs Dying Out At Sessions
Over the past couple of years I've noticed that rebel songs are not being played much by ballad groups or at sessions. Has anybody else noticed this ? This would be a shame in my opinion, the memory of our forefathers who fought so bravely for Ireland's freedom should be remembered and honored. Perhaps the rebel songs are just not being played around the Dublin area where I attend ballad sessions and are being played elsewhere ? but I have seen folk groups where in the past have included a good amount of Irish rebel songs and are no longer playing them. Of course I'm not referring here to The Wolfe Tones, but to the other less well known ballad groups who play the pubs and clubs around Ireland every night. I would appreciate your view on this. If you regularly do a folk session consider throwing in a few rebel songs, have a look at the Wolfe Tones section for ideas

Marc Fahrbach has helped me with well over three hundred songs on this site, his contribution to the chords of The Dubliners, The Wolfe Tones, The Fureys and a whole load of traditional folk songs has added immensely to the popularity of what has become every ballad singers favorite site for guitar chords. When I get a request I hand the song over to Marc to put chords to it. Even songs I wanted to learn myself but wasn't sure if I had the chords correct I'd ask Marc to have a look and see what changes the song required. Marc comes from Germany and has a great love of Irish music, especially the Dubliners songs and The Wolfe Tones. Most of the newer songs from The Wolfe Tones have chords put to them by Marc as well as a whole heap of the Dubliners songs that were not available anywhere else. He has even tackled some Johnny McEvoy stuff he never heard of before. Marc has a fine tuned ear for music and I'm most grateful for his enormous input.

Blog
Another one of my hobbies is Acrylic Painting. I cover a wide range of subject matter and will paint almost anything, from a typical Irish landscape to a double decker bus. One of my favorites is the house from The Little House On The Prairie Painting
Enjoy
And
Slainte