Traditional folk song. recorded Dave Swarbrick and Martin Carthy who recorded The Lark In The Morning Song . The guitar chords are in two keys, the first is in Am and the second version of the song is in Gm.
[Am]There's a corner in the meadow where the [Em]lads and lasses meet
Oh they do here what they couldn't do [Am]in the open street
They [Am]play all kinds of games there, but the [Em]one I like the best
Is [Am]where every laddie rumples up the [Em]cuckoo's [Am]nest.
Chorus:
It's high the cuckoo, low the cuckoo, high the cuckoo's nest
It's high the cuckoo, low the cuckoo, high the cuckoo's nest
I'll give any maid a shilling and a bottle of the best
Just to rumple up the feathers of her cuckoo's nest
I wooed her in the morning and I had her in the night
She was my very first one so I tried to do it right
I searched around and wandered and I never would have guessed
If she hadn't showed me where to find her cuckoo's nest

When she showed me where to find it I knew just where to go
Through the underbrush and brambles where the little cuckoos grow
From the moment that I found it, she would never let me rest
From rumpling up the feathers of her cuckoo's nest.

It was bushy, it was prickled, it was feathered all around
It was tucked away so neatly and it wasn't easy found
She said young man you're blundering, but I knew it wasn't true
For I left her with the makings of a young cuckoo
Here's the chords in G

[Gm]There's a corner in the meadow where the [Dm]lads and lasses meet
Oh they do here what they couldn't do [Gm]in the open street
They [Gm]play all kinds of games there, but the [Dm]one I like the best
Is [Gm]where every laddie rumples up the [Dm]cuckoo's [Gm]nest.

Lyrics And Chords C-F
The above youtube video is by a band called Cuckoo's Nest from Ireland. They are all cousins who were thought how to play their musical instruments by their gran mother who has the nick name ''Cuckoo'' . There are 15 members of the band. The video is from The Late Late Toy Show which was broadcast on the 25-11-2022 on R.T.E. Television Ireland. 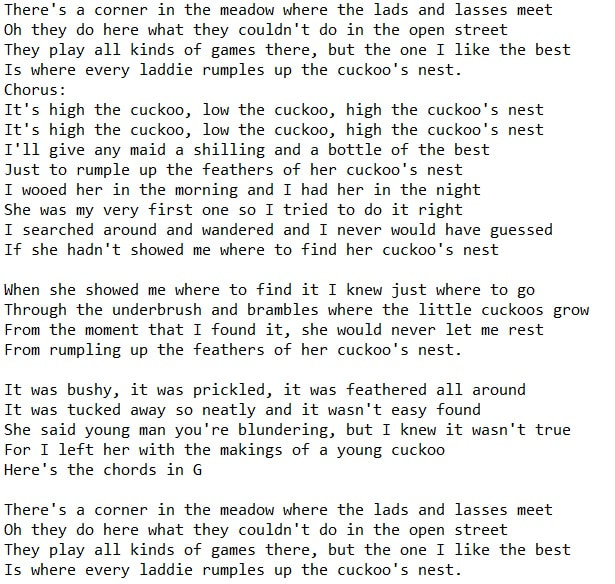