Dublin Jack Of All Trades Irish lyrics and guitar chords

A traditional song recorded  by The Johnstones and The Dubliners.
This song mentions 52 streets or places in Dublin. Other folk songs relating to
Dublin include the most famous of all the Molly Malone Song about a fish monger.

On George's Quay I first began and there became a porter
Me and my master soon fell out which cut my acquaintance shorter
In Sackville Street, a pastry cook; In James' Street, a baker
In Cook Street I did coffins make; In Eustace Street, a preacher.

In Baggot street I drove a cab and there was well requited
In Francis Street had lodging beds, to entertain all strangers
For Dublin is of high renown, or I am much mistaken
In Kevin Street, I do declare, sold butter, eggs and bacon.

In Golden Lane I sold old shoes: In Meath Street was a grinder
In Barrack Street I lost my wife. I'm glad I ne'er could find her.
In Mary's Lane, I've dyed old clothes, of which I've often boasted
In that noted place Exchequer Street, sold mutton ready roasted.

In Temple Bar, I dressed old hats; In Thomas Street, a sawyer
In Pill Lane, I sold the plate, in Green Street, an honest lawyer
In Plunkett Street I sold cast clothes; in Bride's Alley, a broker
In Charles Street I had a shop, sold shovel, tongs and poker.

In College Green a banker was, and in Smithfield, a drover
In Britain Street, a waiter and in George's Street, a glover
On Ormond Quay I sold old books; in King Street, a nailer
In Townsend Street, a carpenter; and in Ringsend, a sailor.

In Cole's Lane, a jobbing butcher; in Dane Street, a tailor
In Moore Street a chandler and on the Coombe, a weaver.
In Church Street, I sold old ropes- on Redmond's Hill a draper
In Mary Street, sold 'bacco pipes- in Bishop street a quaker.

In Peter Street, I was a quack: In Greek street, a grainer
On the Harbour, I did carry sacks; In Werburgh Street, a glazier.
In Mud Island, was a dairy boy, where I became a scooper
In Capel Street, a barber's clerk; In Abbey Street, a cooper.

In Liffey street had furniture with fleas and bugs I sold it
And at the Bank a big placard I often stood to hold it
In New Street I sold hay and straw, and in Spitalfields made bacon
In Fishamble Street was at the grand old trade of basketmaking.

In Summerhill a coachmaker; in Denzille Street a gilder
In Cork Street was a tanner, in Brunswick Street, a builder,
In High Street, I sold hosiery; In Patrick Street sold all blades
So if you wish to know my name, they call me Jack of all Trades.

Back to Irish Lyrics And Chords C-F 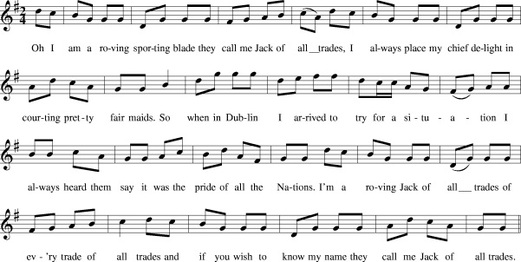