Farewell Ye Banks O'Sicily Lyrics And easy guitar chords.  chordsThe  lyrics are by Hamish Henderson. The ukulele and five string banjo chords are included. It is an old pipe tune called "Farewell to the Creeks".The tune was written by a Pipe major from the Gordon's who was captured at Le Cateau in August 1914 as the German Army swept into France. I think he wrote the tune in POW camp (he got some kind of medal for his resistance in camp). Anyway he was Pipe Major J.B. Robinson and the "Creeks" referred to in the tune are at Portknockie on the Mory Firth in Scotland. The above info. was sent to me by Brian MacLeod.This song is based on the experiences of the writer while he served in Sicily after North Africa during the second world war, he later took part in the invasion of Italy in 1943.Captain Hamish Henderson made a name for himself after the war as a fine poet songwriter and folklorist.Hamish was the founder of the School of Scottish Studies at Edinburgh University. He passed away in 2002. The song is sang here in the youtube video by Ryans Fancy who formed in Canada in 1971 and continue to play around Newfoundland and Labrador spreading and keeping the folk tradition alive. The main singer in the band Dermot O'Reilly passed away in 2007. With Ryan's Fancy Dermot also done a great job covering The Streets Of London Song by folk singer / songwriter Ralph McTell. The guitar chords are in the Chordpro format.

The drummie is polisht, the drummie is braw
He cannae be seen for his webbin awa
He's beezed himsel' up for a photy and a'
Tae leave wi' his Lola his dearie 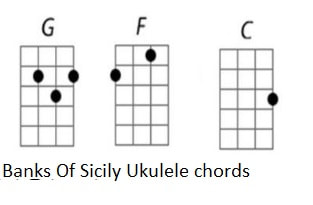 This song is also known as "The 51st. Highland Division`s Farewell to Sicily" and is most likely the correct name.
​Included below are the five string banjo chords. 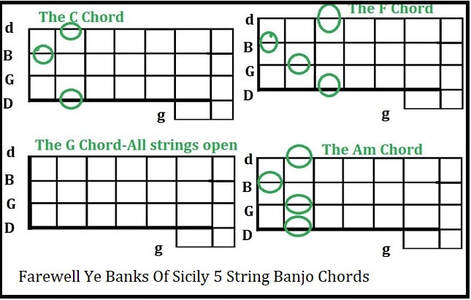