Lyrics And Chords From N To R

There are several hundred youtube videos on the site. These videos are only here as a guide to give you the gist of the timing of the song. The videos may not be in the key that I have set the chords to any given song unless I have stated this but most are. Several visitors to the site have written to be saying they are having problems playing along to the videos. Once again I say, play the song in a key that suits your own voice. For example Tommy Byrne from The Wolfe Tones plays a lot of songs in the key of F Major, this key won't suit most guitar players. If the chords I have given don't fit your voice then change the key of the song with the key changer. All the chords are in chordpro . 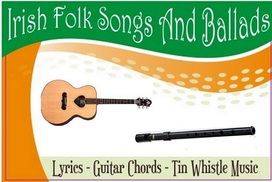 Keith Rankin
comment: I wanted to thank you for this site.  I was introduced to the tones while I was in college some 20 years ago along with groups like the Chieftans, The Clancy Brothers and others.  I have maintained my passion for this rich and wonderful music to this day.  As an American of Scots/Irish descent I have, as you noted, learned a great deal of the history of my family's home not only from the music but from the research that those songs inspired in me.  As a sometime guitar player I am thoroughly enjoying the addition of the great rebel songs to my list for local parties and get togethers with friends.  I enjoy introducing people to the music and the nation I love so well.  This rich history and heritage must never be allowed to pass away for mere commercialism or politics.  Thank you, God Bless and keep up the work.