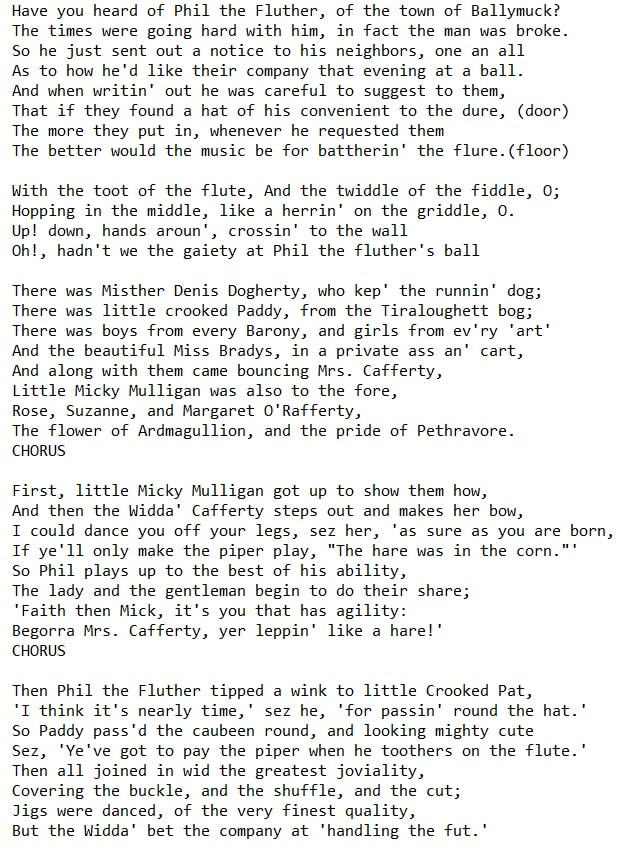 There was Misther Denis Dogherty, who kep' the runnin' dog;
There was little crooked Paddy, from the Tiraloughett bog;
There was boys from every Barony, and girls from ev'ry 'art'
And the beautiful Miss Bradys, in a private ass an' cart,
And along with them came bouncing Mrs. Cafferty,
Little Micky Mulligan was also to the fore,
Rose, Suzanne, and Margaret O'Rafferty,
The flower of Ardmagullion, and the pride of Pethravore.
CHORUS

First, little Micky Mulligan got up to show them how,
And then the Widda' Cafferty steps out and makes her bow,
I could dance you off your legs, sez her, 'as sure as you are born,
If ye'll only make the piper play, "The hare was in the corn."'
So Phil plays up to the best of his ability,
The lady and the gentleman begin to do their share;
'Faith then Mick, it's you that has agility:
Begorra Mrs. Cafferty, yer leppin' like a hare!'
CHORUS

Then Phil the Fluther tipped a wink to little Crooked Pat,
'I think it's nearly time,' sez he, 'for passin' round the hat.'
So Paddy pass'd the caubeen round, and looking mighty cute
Sez, 'Ye've got to pay the piper when he toothers on the flute.'
Then all joined in wid the greatest joviality,
Covering the buckle, and the shuffle, and the cut;
Jigs were danced, of the very finest quality,
But the Widda' bet the company at 'handling the fut.'

The pdf version of the sheet music has the lyrics and chords included and it's in the key of C Major.