Old Maid In The Garrett Lyrics And Chords

The Old Maid In The Garrett Irish Folk Song Lyrics And Guitar Chords, was recorded by The Clancys , The Flying Column who recorded a version of The Galtee Mountain Boy Song , Steeleye Span , The Dublin City Ramblers, this song dates back to the 17th century but the lyrics here are 19th century by Martin Parker from London .The guitar chords in D are in chordpro. [Not a song you would hear a lot of women sing] the sheet music is included. The youtube video is Sweeneys Men who play the song in the key of F#. Steeleye Span play it in F.

Old Maid In The Garrett Lyrics And Easy Guitar Chords In D
[D]Now I've often heard it said from me father and me mother
That the[A] going tae a wedding is the[G] making of a[D]nother
[D]Well, if this be[G] true, I will[D] go without a biddin
O kind providence, won't you send me tae a[A] wedding

Well, there's my sister Jean, she's not handsome or good looking
Scarcely sixteen and a fella she was courting
Now at twenty-four with a son and a daughter
Here am I at forty-five and I've never had an offer

So come landsman or come pinsman, come tinker or come tailor
Come fiddler or come dancer, come ploughboy or come sailor
Come rich man, come poor man, come fool or come witty
Come any man at all that will marry me for pity

Well now I'm away home for nobody's heeding
Nobody's heeding and nobody's pleading
I'll go away to my own bitty garret
If I can't get a man, then I'll have to get a parrot
What's A Garrett ?

A garret is a habitable attic [ loft ] or small and often dismal or cramped living space at the top of a house. this was the least prestigious position in a building, and often had sloping ceilings. 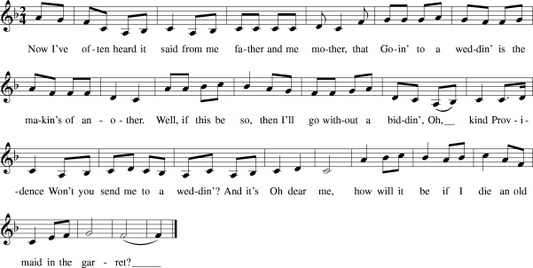