Most of the songs here have just three chords / tabs, easy for the novice guitar player, If you can't find  what you want here, have a look at the other sections or use the search box below , sometimes the  lyrics may have a different title. This site has the biggest collection of Irish folk, ballads and rebel songs ever collected and on one easy to find website, over 2000 songs and I'm still collecting more each day.A lot of the rebel songs and ballads are now in the Wolfe Tones section.
The only reason this site is here is to keep the Irish folk/ballad scene alive. If any songwriter  has a problem with their work been displayed here let me know and it will be removed.But I believe from an artists prospective to encourage others to preform their songs at school,collage,pub or club is of great promotional value

As the Wolfe Tones say ''Let the people sing their stories and their songs and the music of their native land''Learn the songs join a band,get a session going in your local pub or club.Ask your local radio station to play Irish folk songs , lets keep our songs alive

All the lyrics here have been credited to who wrote them or if traditional then to whoever singer/band made them famous.Please let me know if you have any info./background on a song that may be of interest , any requests just email. The chords/tabs have been kept easy, mostly just three chords.If you have written an Irish or folk song and want it published, send it to me, lots of novice and established songwriters have .

This site is a history of Ireland through songs. Singing and songwriting is a tradition in Ireland , It goes back hundreds of years , from the time of the bards[storytellers] to the modern folk/balladeer.
Songwriters throughout Ireland's history have written about every aspect of Irish life , from our troubled history under British rule , about the general strike of 1913 , about unemployment , hunger-strikes , the travelling community ,  about the evictions of families by cruel landlords , tales of drink , also anti drug tunes like Uncle Nobby's Steamboat , love, happy and sad stories , songs about the sea and our brave fishermen , and emigration to find a better life. hundreds more commemorating patriots and hero's.and plenty of Celtic tunes
These songs tell us a lot about who we are as a people and the hardship we endured to get to where we are today in this great country of ours. So pull up a chair, you're welcome to the best ballad session in the world.
The following is a few heart felt words sent to me from Sean Connell in America whose appreciation for Irish folk music has grown substantially over the years thanks to this site.Thanks for the help. I wish I could shake your hand. I am 31 years old and have played the guitar since I was 15 or so. I have always been into folk music, I incorporated some Irish folk into my American folk. But I was never as focused on Irish music as I am now. I owe it all to you. I have been using this site for several years. I cant be sure how long. I think I was with you since real early because I have seen the site grow exponentially. I remember when it was a lot smaller. I try to turn as many people on to it as possible. Anyway, this site alone has been the reason for my rapid learning of Irish folk, my confidence to go to the sessions, and reaching my ultimate goal of forming my own band with a fiddler and a mandolin/bohdran player with me on guitar and vocal. I cant thank you enough. I only hope we can have a session together someday. Keep up the good work, you are the only one who is doing it, and you are doing it for free, because you love Irish music, just like me--- Sean Connell RI USA originally from Boston.

comment: I wanted to thank you for this site.  I was introduced to the tones while I was in college some 20 years ago along with groups like the Chieftains, The Clancy Brothers and others.  I have maintained my passion for this rich and wonderful music to this day.  As an American of Scots/Irish descent I have, as you noted, learned a great deal of the history of my family's home not only from the music but from the research that those songs inspired in me.  As a sometime guitar player I am thoroughly enjoying the addition of the great rebel songs to my list for local parties and get togethers with friends.  I enjoy introducing people to the music and the nation I love so well.  This rich history and heritage must never be allowed to pass away for mere commercialism or politics.  Thank you, God Bless and keep up the work. Keith Rankin.

Colin Flavin 2007. I wrote for a ballad competition in Listowel, it is a social commentary on the changes Ireland has experienced.  I love the stories and memories my grandmother shares with me and the memories she has from her mother, of the community, the family together singing, talking, telling stories a real oral tradition, and this is what I think is also kept alive through you collecting these songs so we can continue to get together and sing them and share them again and again.  Nowadays I think people are more interested in possessions and wealth and a lot of society has become cruel and hard and have forgotten that we are all one community and share a marvelous rich culture. Colin Flavin 2007 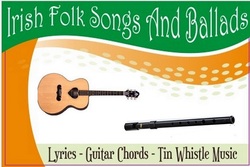