The Black And Tan Gun Lyrics And Chords

Irish Rebel Song- Recorded by Wolfhound, The Johnny Flynn Showband, Padraig Mor, The Shamrock Rebels and I'm sure Sean Dunphy recorded it back in the 60's. I have included 2 versions of the guitar chords, including the one's used by Wolfhound in the key of D. Come Out Ye Black And Tans song is also on the site, which is a lot more well known in Ireland.
It was [G] down in the [Em] town of old [D] Bantry,
Where [C] most of the [D] fighting was [G] done,
It was there that a [Em] young Irish [D] soldier,
Was [C] shot by a [D] Black and Tan [G] gun.

As he raised himslef up to his elbow,
As the blood from his wounds ran red,
He turned to his comrades beside him,
And these are the words he said:

They wrote: "Here lies a true Irish soldier,
Who was shot by a Black-and-Tan gun,
And now we are back in old Dublin, our victory over and won,
We think of our comrades we buried under God`s rising
Here's the guitar chords in the key of the version of the song by Wolfhound, key of D Major
It was [D] down in the  town of old [G] Bantry,
[A]Where  most of the fighting was [D] done[A],
A [D]gallent young soldier of [G]Erin,
Was [A] shot by a Black and Tan [D] gun. 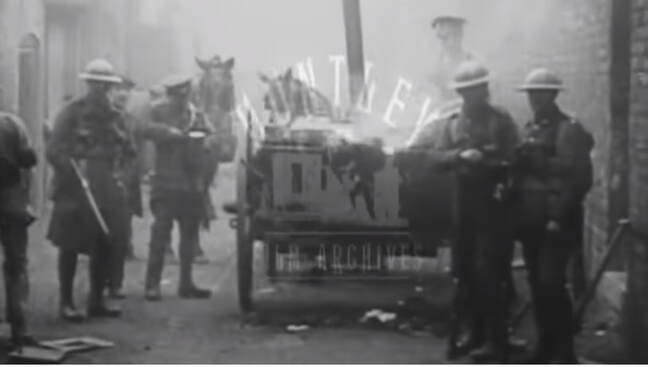