Irish folk song. Traditional.The fingerstyle [ picking ]guitar tab is included plus a version in CGDA tuning for the tenor guitar / mandola. The 5 string banjo chords for the key of G are included. Van Dieman's Land is named after the Dutchman who discovered it. Many people were transported there by the British mostly for petty crime, causing a lifetime of misery for their families. Recorded by The Dubliners [ lyrics ], The Clancy Brothers, The High Kings, The Pogues, The Irish Rovers to name a few. The guitar / ukulele chords are in the key of D in chordpro, the same version I'm playing in the youtube video. It's a very easy song to learn. The sheet music for tin whistle for the black velvet band is also included on the site.​ The black velvet band fingerstyle guitar tab included.

Chorus]
Her[D] eyes they shone like diamonds,you think she was queen of the[A7] land.
With her[D] hair thrown over her shoulder,tied[A] up with a black velvet[D] band.
[1]
As I went walking down Broadway,not intending to stay very long,
I met with this frolicksome damsel,as she came tripping along.
[2]
A watch she took from his pocket,and slipped it right into my hand,
On the very first day that I met her,bad luck to the black velvet band.
[3]
Before the judge and jury,next morning we had to appear,
A gentleman claimed his jewellery,and the case against us was clear,
[4]
Seven long years transportation,right down to ''Van Diemen's Land''
Far away from my friends and companions,betrayed by the black velvet band,

[Chorus after every verse]
Here's the guitar chords in the key of C.

Her [C] eyes they shone like diamonds,you think she was queen of the [G7] land.
With her [C] hair thrown over her shoulder,tied [G] up with a black velvet [C] band.

Key of G
​Her [G] eyes they shone like diamonds,you think she was queen of the [D7] land.
With her [G] hair thrown over her shoulder,tied [D] up with a black velvet [G] band.
Black velvet band guitar tab in G Major
Below is the PDF Ebook of folk songs lyrics and chords. The songs are in 3 different keys, There's over 500 songs in the ebook. Most have only 3 easy chords.
​Price €8.90 . I'll email the ebook after payment.
​ 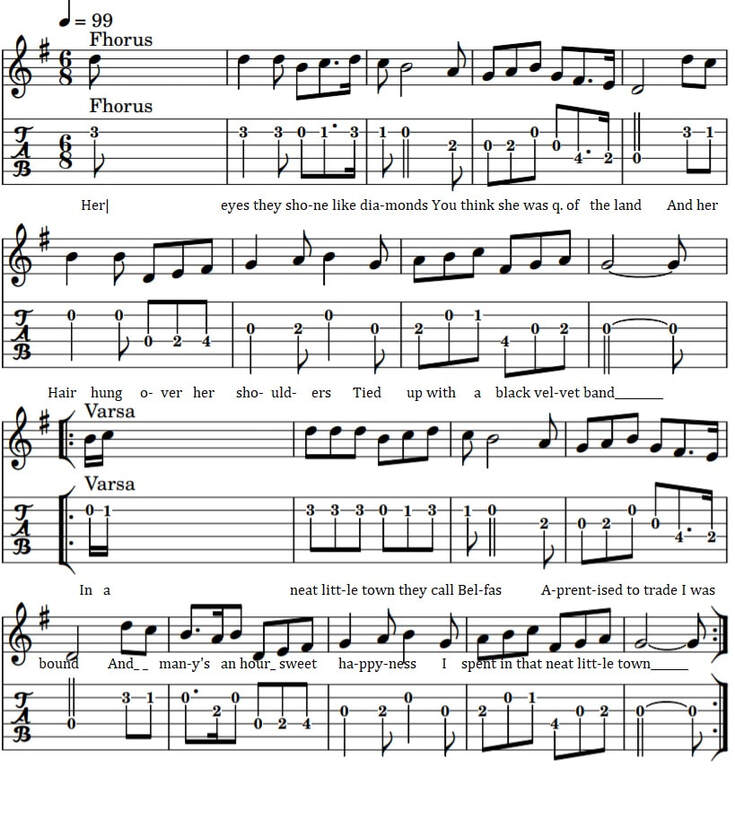 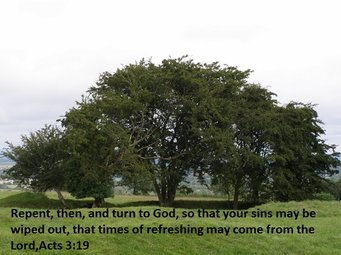 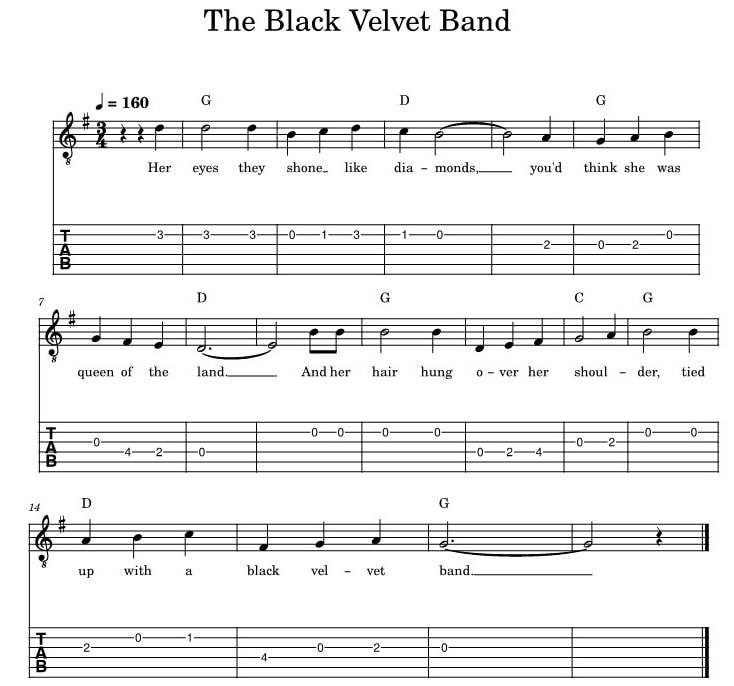