The Boys Of Kilmichael lyrics and chords

The Boys Of Kilmichael, Irish Rebel Song-the video is of Declan Hunt. Also recorded by Derek Warfield Tom Barry was the O.C. of The Third West Cork Brigade and also the training officer. This song details the battle that took place between the flying column of 36 men who took on the British Auxiliaries on the 28 November at 4pm at Kilmichael. The tune used in the song is Rosin The Bow.

The tin whistle sheet music and letter notes for The Boys Of Kilmichael are in my PDF version of my tin whistle book ,  from this site.
As we [G] gather in song and in [D] sto[Am]ry the [G] memory of Pearse and [Em] McBride,
Whose [G] names are illumined in [D] glo[Am]ry, and [G] martyrs for [D] long since have [G] died.
Forget not the boys of [C] Kilmichael those [G] brave lads so gallant and [Em] true
Who [G] fought 'neath the green flag of [D] E[Am]rin and [G] conquered the [D] red, white and [G] blue.

On the twentieth day of November, the day that the tans left Macroom.
they were loaded in two crossley tenders not knowing that they'd meet their doom
But when they came to Kilmichael they suddnely came to a stop
For they met with the boys of the column Who made a clean sweep of the lot.

The sun in the West it was sinking for the eve of a cold winters day,
When the Tans who were eagerly waiting sailed into the spot where we lay
Then over the hills went the echo the peal of the rifle and gun
The flames from the lorries gave tidings that the boys from Kilmichael had won.

The lorries were out before twilight and high over Dunmaway Town
Our banners in triumph they were waving just to show that the Tans had gone down
So we gathered our rifles and bayonets and soon left with grin so obscure,
And we never did drink till we halted at the far away camp of Dunure.

So here's to the boys of Kilmichael those brave lads so gallant and true
Who fought 'neath the green flag of Erin and conquered the red, white and blue.

Tom Barry
Similar songs relating to that period in Irish history and the fight against the British occupying forces include ;
Barry's Column -

The Ballad Of Dan Breen - 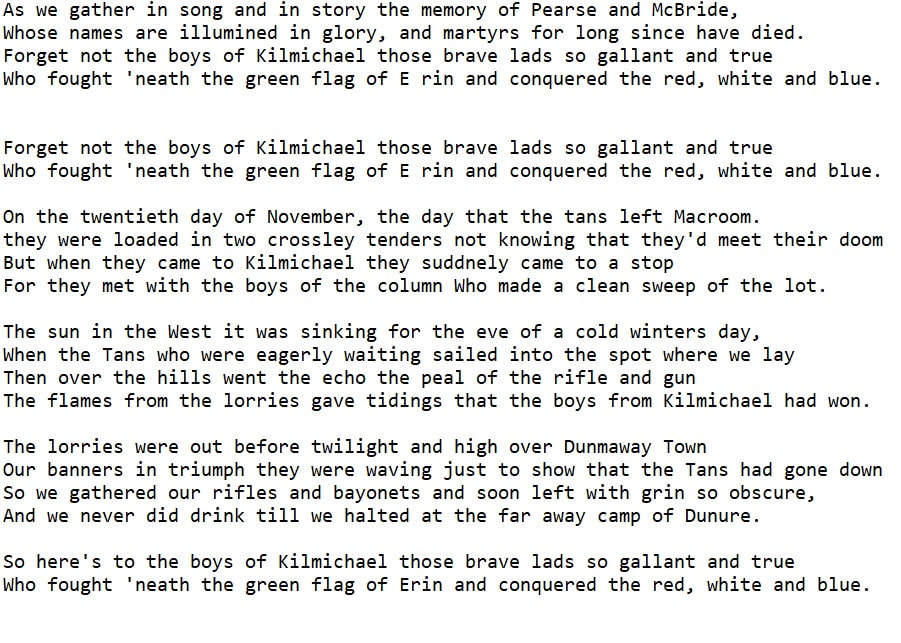 The boys of Kilmichael lyrics