A Children's Winter Lyrics And Chords

By Dermot O'Reilly. Recorded by Dermot and Ryan's Fancy. The tin whistle notes are also included and provided by Rick Noseworthy. Also recorded by The Dublin City Ramblers,  The Ennis Sisters and Celtic Connection. Ryan's Fancy also recorded a song I play myself Twenty One Years Song which I sang at ballad sessions around Dublin for years. 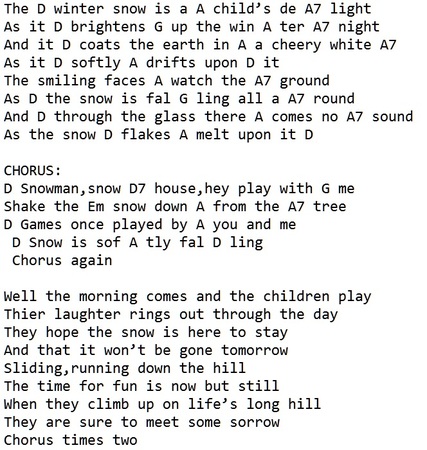 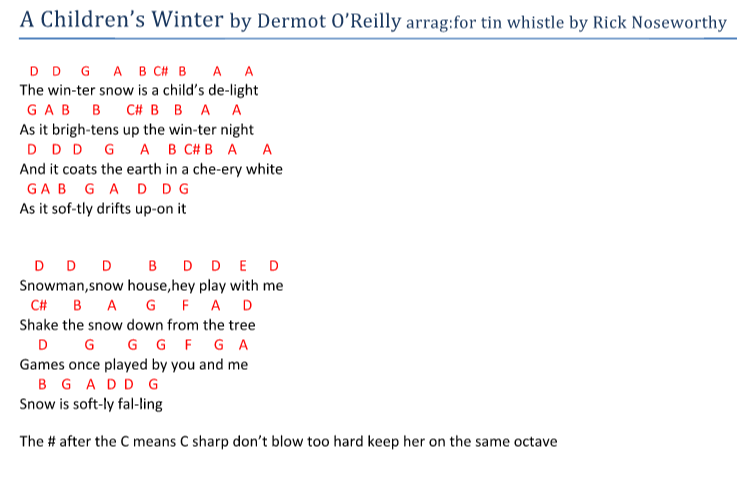 Dermot was an irish-born,Canadian musician,producer and song writer.
He was born Dublin,Ireland and educated at lnchicore,county dublin.
In March 1968,he emigrated to Toronto Canada where he met future bandmates Fergus O’Byrne and Dennis Ryan.He was one of the founding members of the sons of Erin and he helped form the band Sullivan’s Gypsies in 1970.

In 1971 Dermot along with O’Byrne and Ryan moved to St.Johns newfoundland,and began preforming as Ryan’s Fancy.Ryan’s Fancy became a popular Irish group and household name who released 12 albums and hosted a successful television program for several seasons.Dermot wrote and produced many Irish songs as a member of Ryan’s Fancy,as a solo artist and later as a member of the group Brishney and preformed regularly with Fergus O’Byrne.

In 2004 Ryan’s Fancy was honored with a lifetime achievement award by the East Coast Music Association.After Ryans Fancy disbanded Dermot founded piperstock productions,a video production and marketing company in Torbay Newfoundland.Some of his productions include,The Last Run;Rigs,Jigs and songs from the heart and Cain’s legacy and many others.
A better friend a man never had.