As Gaeilge/Gaelic Lyrics And Guitar Chords. All the songs in this section of the site are in the Irish language and are some of the most popular Gaelic songs in Ireland. Guitar chords are in chordpro format. I have received lots of requests for guitar tabs in Gaelic, no other site was doing it and there are no music books available which exclusively give chords and lyrics so I decided I'd give it a try. If this section encourages you to learn even one song in Irish then it is worth it. Marc Fahrbach has given me great encouragement and has added most of the guitar chords. I hope to add more songs in the near future. Most of the tunes are traditional songs and have being brought back by Altan and The Cassidys 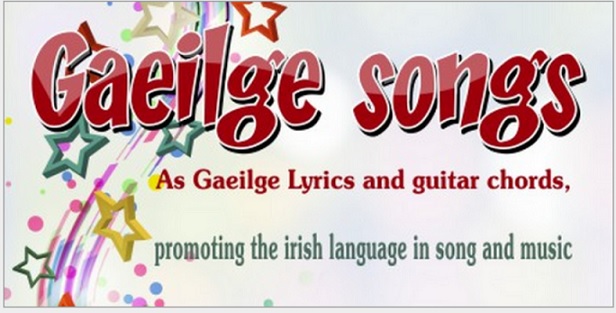 This is usually because songs in Irish have absorbed more stylistic features from the old poetry.
Many songs in Irish are deliberately vague or even ambiguous. They may open with a question, such as ''A Bhuachill An Chuail Dualaigh'' where the first line is ''Where Did You Sleep Last Night ''

The identities of the main people in the song may be confused and in many cases the details of a relationship are not given. In most parts of Ireland what were known originally as songs are now played as tunes. The reason is because of the huge decline of the Gaelic language that happened after the great hunger
of 1847 /52 [So Called Famine]. In many of the Irish speaking [Gaelteach] areas the lyrics are still sang.