​Songs About The Easter Rising 1916

On this page is a list of famous Irish rebel songs, I.R.A. songs for the most part [ Lyrics And Chords ] relating to the Easter 1916 Rising which mostly took place mainly in Dublin. The songs relate to the events that took place in Dublin and the surrounding area. There are a couple of hundred songs on this site that mention the men who took part in the rising but the songs don't really relate to the Easter rising. The one's on this page are the most popular. Most have guitar chords.
Arbour Hill

​Banna Strand
​The Ballad Of Roger Casement by Dublin based ballad group The Wolfe Tones.

The Dying Rebel
This old ballad tells the sad story of a Cork man's heartache at loosing his only son in the Easter rising.

Freedom Sons
This Tommy Makem song is relatively unknown to the general public but well known to those who regularly attend ballad sessions.

Grace This is the most popular modern day song surrounding the 1916 rising and one of the best.

God Help Ireland This song as far as I can tell was only ever recorded by The Irish Brigade from Tyrone.

Ireland Unfree Shall Never Be At Peace The song features an old man reminiscing about days long ago when he fought in The Easter Rising with his friend Padraic Pearse.

Michael Collins By The Wolfe Tones There are five songs named Michael Collins on this site, the one written by Brian Warfield gives a good insight into his involvement in the 1916 rising

The Men Of Easter Week

Padraic Pearse This song by The Wolfe Tones is about the leader of the men who took part in the rising and who was based in the General Post Office at the time.

Three Coloured Ribbon Along with the song above ''Grace'' there have been very little love songs written about the rebellion.

The Starry Plough. A recent song about James Connolly by Irish rebel band The Druids

The Volunteer This is another recent song. It was brought out by Donegal based group Goats Don't Shave in 2016

Although there are massive commemorations planned by The Irish State and various others to mark the 100th anniversary of the 1916 Easter Rising the songs on this page are still banned by state broadcaster R.T.E. and other radio and T.V. channels simple refuse to play them. It's been like this since the early 1970's since the troubles in the North of Ireland broke out. Before the 1970's these songs were just referred to as ''Irish Songs'' , but when the troubles started they became ''Rebel'' songs and were banned.
The following piece was the main headline in The Irish World newspaper on Saturday May 13th 1916. The Irish World was based in New York.

​England Murdering Ireland's Leaders
From a newspaper of the day
England keeps up her brutal work - Redmond and Carson join hands with English soldiery in the effort to stamp out Irish nationality , - People of Ireland goaded  beyond endurance just as in 1798 when Father Murphy said that ''It Is Better To Die Fighting Like Men Than To Be Shot Like Dogs In The Ditches'' - Forty six Irish nationalist leaders sentenced to death in a few days. Great indignation in Ireland and throughout the civilized world.

The whole civilized world has been stunned by the display of British brutality during the past week. Since the last issue of The Irish World forty six Irish patriots have been sentenced to death, including one woman, Countess Markievicx [ formally Miss Connie Gore Bore Booth ] the distinguished Irish poetess.

The death sentence of Countess Markievick was commuted to life in prison and 33 others have been given sentences varying from three years to life. Even the history of the infamous Norbury does not give the parallel for the inhuman sentences which have been inflicted.

Eoin O'Neill, the chairman of the Irish Volunteers has been placed under arrest and and is probably on the way to London to meet a martyrs fate. Mr Sheehy Skeffington wo is well known to readers of The Irish World for the many splendid articles from his pen which have appeared in this newspaper was shot to death defending one of the Irish ramparts in the City Of Dublin. In another page will be found biographies of the various men who have been butchered  by England.

Mr John Redmond and Edward Carson are in daily consultation and did not object to the sentences of the Irish national leaders. The Daily Express in Dublin said on April 1st that the speedy and happy dispatch of many Irish leaders was desired, The Daily Express knew that what it said was true and even then the speedy dispatch of several men opposed to Redmond's leadership was being arranged.

The day following the surrender of the Irish Volunteers the cables reported that Redmond and Carson were in consultation. They both made addresses in The House Of Commons next day and used almost the same phrasing in their speeches.Then both asked clemency for the rank and file but not for the leaders. The fate of the leaders had already been settled. Redmond had been described in his New York organ as the adviser of the English government. The advise he gave in the latest crisis in Irish nationality will not soon be forgotten. Even he himself is showing his fear of the indignation of his countrymen at home and abroad which is being expressed in no uncertain sound.

Arrests of batches of Irish volunteers are being reported from various points, Galway Wexford Waterford, Kerry and all over the South and West. The Irish volunteers will die fighting in every part of Ireland rather than obey the order passed by Carson and Redmond that they lay down their arms 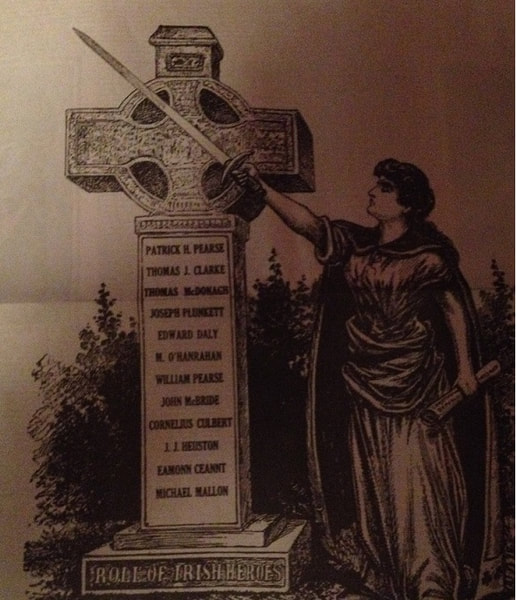