The Furey Brothers And Davie Arthur Lyrics And Chords

The Fureys may have recorded other songs that are in the other sections, these are the lyrics and chords most associated with The Fureys And Davie Arthur. The system of chords I use is the chordpro format. Most of the songs include a youtube video and chords in the same key as the youtube video.
​Below is the PDF Ebook of folk songs lyrics and chords. The songs are in 3 different keys, There's over 500 songs in the ebook. Most have only 3 easy chords.
​Price €8.90 . I'll email the ebook after payment.
If you need a great guitar player to back a song or a tune then George Furey is your man. His poetic fingers forever searching the instrument he loves to produce the pure liquid tone as sweet as honey. From fast reels to slow airs and anti war songs which cry out for peace. These are the sounds no one else can feel as well as George Furey. When Paul left home to form the group ''The Buskers'' , George joined his father, out of all the boys he was to stay the longest with the father Ted. And being with the old man such a length of time he gathered most of the tunes and songs from from his teacher, Ted Furey. George is also a fine singer and songwriter and also inherits banjo and mandolin which he is equally at home with. George is a very happy man and very proud of his music and family.
Eddie is the oldest of The Fureys and is mostly known from being with the duo Eddie And Finbar Furey from the 1960's and 70's. Eddie started his music from a very young age . By the time he left school he was a fine fiddle player and had won several titles with his brother, Finbar at Fieadh Cheoils around Ireland. At the age of 16 he gave up the fiddle and found his through vocation as a singer, songwriter and collector of music. With his guitar and Finbar's pipes he created a whole new sound in folk music. Their brand of music triggered off a whole new wave, they were the rebels of the purists, and were soon joined by such groups as, Planxty, The Bothy Band, etc. Without Eddie's influence on his brother Finbar, the new wave of folk music of the 60's and 70's might not have come to be, that's Eddie Furey.
Terry Bradford
Terry has worked on and off with the Fureys for many years having written many songs for them, including their hugely popular.Through The Eyes Of An Irishman. He has also produced many albums for them including 21 Years On...My Fathers House [ lyrics ] & Today
How Davie Arthur Joined The Fureys
Finbar and Eddie were in the middle of a break at the Edinburgh Arts Festival in 1967 when a skinny lad with a cheeky smile came up to them and said, ''I want to play music like that'' , He was very insistent so Finbar told him to go to his father and mother in Ballyfermot, Dublin. They forgot all about him . Four years passed and Eddie and Finbar returned from America to find the same young boy, now a fully grown young man still living with their parents in Dublin and able to play the hardest of music with the greatest musicians in Ireland. His name is David Arthur. His mother's people came from Gweedore, Co, Donegal, all of them traditional musicians. He needed the music brought out of him and again the master was there to help him do so. Davie is a great music man and known as King Of The Strings.
Paul Furey - If you want to form a band the first thing you need is a an anchor man. Paul Furey was the third eldest of The Furey Brothers and without him the drive of the group's music would lack spirit. He was also a complete  musician at an early age, learning accordion from his mother, Nora who was a fine accordion and banjo player, and developing his own unique style on spoons and bodhran. Nora was always a great booster to the boys, but especially her third eldest Paul. During the years Finbar and Eddie were away touring Paul joined his father Ted on the road to form a duo and together they worked all around Ireland playing in sessions and concerts. A lot of people still have fond memories of Paul and Ted, a lovely lad and the best spiller of a yarn you ever heard.
The band have been together for over 30 years now, Finbar left the group in 1996 and Paul passed away in 2002. George, Eddie and Davey Arthur along with Luke Crowley and Dominic Leech continue on and are as good as ever.

Finbar was the strongest musician in the group,with the help of the boys in the band he arranged most of the songs and tunes for the group.Finbar is the second eldest of The Fureys and was the lead singer[Finbar Has Left The Group]It was his father Ted Furey that had such a strong influence on music and mind that made him the fine musician he is today. His love of uillean pipesis without equal, a master piper and reed maker and fine exponent of five string banjo. Finbar won every known uillean pipe title including
three all Ireland champions and a world title at the age of 18. He now concentrates on writing and collection songs He is without doubt a poet, master musician and singer of great importance. Ted Furey did a great job.
The Fureys Band History 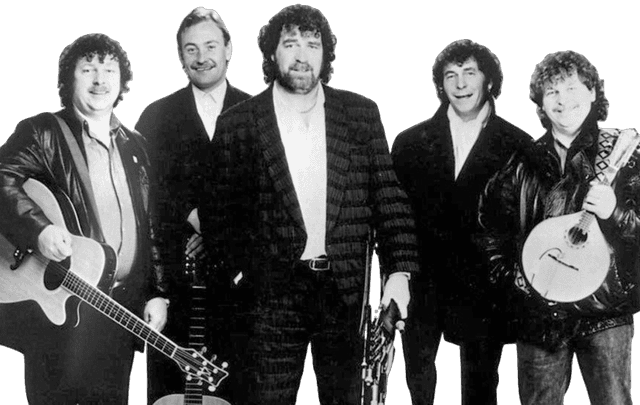