The Woods Of Drumbo lyrics and chords

As with many rebel songs of the time the writer remains anonymous, The air of the song is ''The Nightingale'' [ lyrics ] , the video is of that famous ballad group from the 70s The Wolfehound, which were , Ray McAreavey, Gogie McCollough and Danny Byrne. Connolly Was There song is another of Wolfehound's ballads. 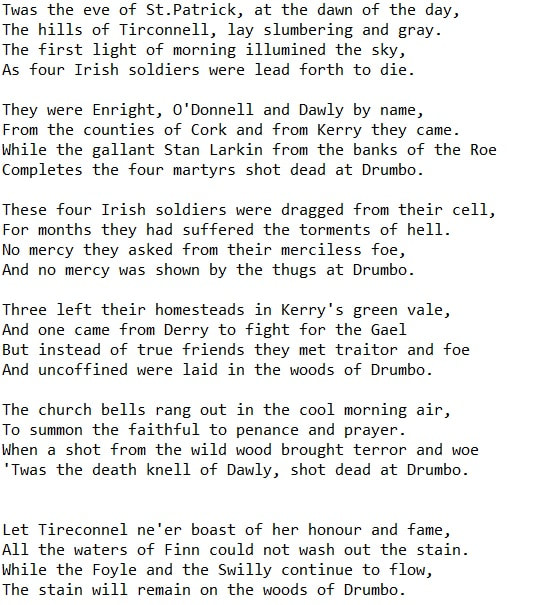 They were Enright, O'Donnell and Dawly by name,
From the counties of Cork and from Kerry they came.
While the gallant Stan Larkin from the banks of the Roe
Completes the four martyrs shot dead at Drumbo.

These four Irish soldiers were dragged from their cell,
For months they had suffered the torments of hell.
No mercy they asked from their merciless foe,
And no mercy was shown by the thugs at Drumbo.

Three left their homesteads in Kerry's green vale,
And one came from Derry to fight for the Gael
But instead of true friends they met traitor and foe
And uncoffined were laid in the woods of Drumbo.

The church bells rang out in the cool morning air,
To summon the faithful to penance and prayer.
When a shot from the wild wood brought terror and woe
'Twas the death knell of Dawly, shot dead at Drumbo.


Let Tireconnel ne'er boast of her honour and fame,
All the waters of Finn could not wash out the stain.
While the Foyle and the Swilly continue to flow,
The stain will remain on the woods of Drumbo. 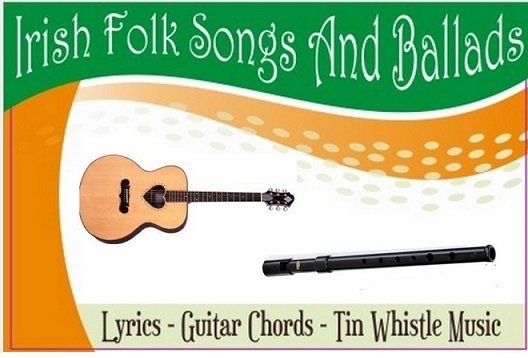 Here are the chords for the key of G