The Sick Note Lyrics And Chords

The Sick Note / The Bricklayers Song Was Written By singer / songwriter Pat Cooksey. sometimes referred to as ''Why Paddy's Not At Work Today'' Pat also wrote The Reason I Left Mullingar [ lyrics ]which was a big hit for The Furey Brothers And Davie Arthur. Also recorded by The Dubliners with Sean Cannon on vocals.The sheet music for tin whistle is included. The Clancy Brothers along with Robbie O'Connell also sang the song. 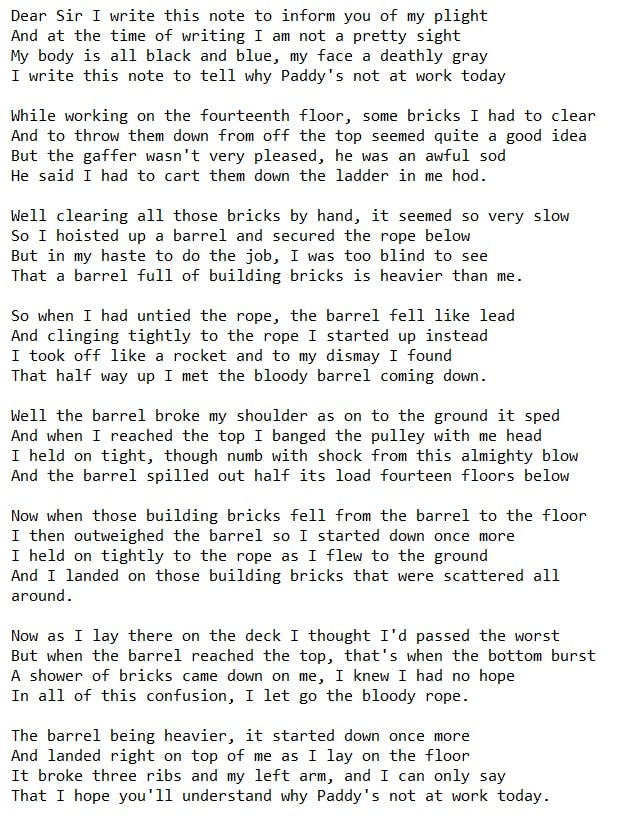 While working on the fourteenth floor, some bricks I had to clear
And to throw them down from off the top seemed quite a good idea
But the gaffer wasn't very pleased, he was an awful sod
He said I had to cart them down the ladder in me hod.

Well clearing all those bricks by hand, it seemed so very slow
So I hoisted up a barrel and secured the rope below
But in my haste to do the job, I was too blind to see
That a barrel full of building bricks is heavier than me.

So when I had untied the rope, the barrel fell like lead
And clinging tightly to the rope I started up instead
I took off like a rocket and to my dismay I found
That half way up I met the bloody barrel coming down.

Well the barrel broke my shoulder as on to the ground it sped
And when I reached the top I banged the pulley with me head
I held on tight, though numb with shock from this almighty blow
And the barrel spilled out half its load fourteen floors below

Now as I lay there on the deck I thought I'd passed the worst
But when the barrel reached the top, that's when the bottom burst
A shower of bricks came down on me, I knew I had no hope
In all of this confusion, I let go the bloody rope.

The barrel being heavier, it started down once more
And landed right on top of me as I lay on the floor
It broke three ribs and my left arm, and I can only say
That I hope you'll understand why Paddy's not at work today.

Over a long number of years there has been much speculation concerning this song. I wrote this song under it's original title Paddy and the Barrell in 1969, and first performed it in The Dyers Arms in Coventry at this time, and in 1972 Sean Cannon, later to become a member of the Dubliners began to perform it in the folk clubs under the title The Sick Note.

The song was based on Gerard Hoffnung's wonderful address to the Oxford Union, but the story in a more simple form dates back to the English music halls in the 1920's and appeared in the Readers Digest in 1937.


I personally gave the words of this song to Noel Murphy in a night club in Coventry in the early seventies and his only contribution to this song was to change the title to Murphy and the Bricks, and when this song was recorded Noel Murphy was obliged to remove his name from the writers credits.

I still have a letter from Misty River Music to this effect. The song under more than 20 alternative titles has since been recorded more than 100 times worldwide, and in every version the words are identical.


This song under all alternative titles has always been the exclusive copywright of myself, Pat Cooksey, and is registered with The Performing Rights Society in London. This includes Dear Boss by The Clancy brothers,
The Bricklayers Song by The Corries and Ray Stevens, The Sick Note by The Dubliners, etc,etc, and also Murphy and the Bricks. No other artist had any input into this song nor is any claim for arrangement valid. Pat Cooksey, Nuremberg, Germany. 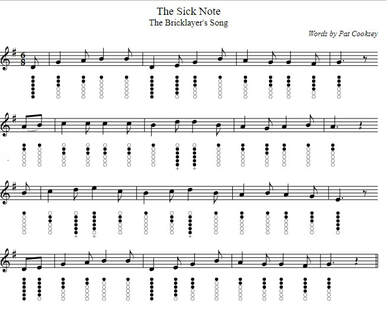