The Ferryman Lyrics And Chords

Written by Pete St. John Pete has been one of Ireland's finest song writers over the last thirty years or so. This song has recently been recorded by Derek Ryan on his album The Simple Things. This is just one of his classics,others include Danny Farrell-The Rare Old Times [ lyrics ]-Ann Devlin The Fields Of Athenry [ song lyrics ]. This song is usually played in the key of A. I have played it with many bands and they all seem to favour the key of A. Also recorded by Irish folk group ''Tickle The Pig''. The sheet music in the key of D Major is included.

Learn The Ferryman On Guitar. There's a little riff before the song, so instead of singing ''Nan, Na, Na,'' like I do, it's up to the banjo, whistle or fiddle player to play the riff. I do it here to show what chords to use. By the way the capo is on the first fret here, if you place it on the second and play what I'm playing, you'll be in the key of A.

The Ferryman Sheet Music Notes In The Key Of D Major 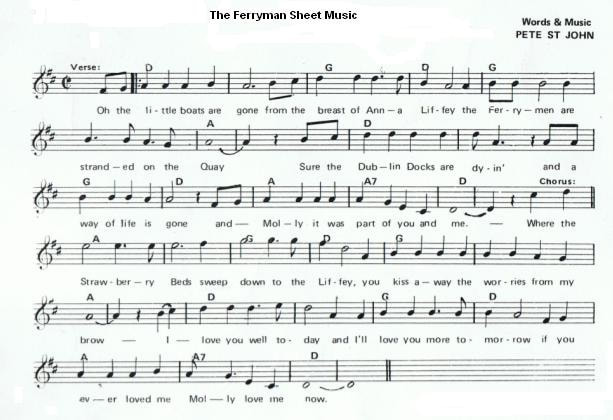