I created this special section for Derek Ryan's songs as a large amount of visitors to the site came looking for his songs. They were already in the Country Section but I thought it better to make a new section considering how many guitar players were playing his songs and place them all in the same place. If your a fan and have guitar chords to any of Derek's songs, can you please send them to me at unitedireland@gmail.com. All the songs are in Chordpro format.

If you'd like the guitar chords for any of Derek's latest songs including his latest album Ten, then send me the lyrics and a link to a youtube video where I can have a listen to the song.
I had a look at Derek Ryan's tour schedule for the summer months and was astonished at the amount of gigs his band are playing. Derek and his band are playing over 40 gigs in a 2 month tour from the 17th of June to 17 August with many more lined up. There are very few bands on the Irish circuit who could match that amount of shows.


Derek and band are one of the most sought after acts in Ireland, and I'm not just talking about country music. I'm talking about all singers and groups. Who would have thought a few years ago that Irish country music would have taken the country by storm. But Derek is not the only one making it big, all the country singers and bands have seen an upsurge in popularity in recent times.
Dance halls around Ireland are packed out most nights of the week, especially the large venues who for years have been known as ''Country Music Venues''. The bands have being helped in no small way by Glor Tir, the Irish Country Music Talent Contest.
But there are several other reasons why country music has gotten more popular in Ireland, Irish people love to dance and there's no better acts to dance to than upbeat country songs.
Reason 3 is the fact that the music is ''live'' , you won't find many preformers using the dreaded backing tracks while playing country songs except for the ''Pub Acts'' , you know the one's I'm talking about. It's usually a 2 piece outfit using a keyboard and with a touch of a single finger he'll have a whole orchestra backing him up. These people will even advertise themselves as a ''Live Gig''. Some will even use backing harmonies to back up their own voice while pretending they are preforming live music.

Derek Ryan
Derek lived in London for seven years. During that time he says he was missing home and that his music wasn't going the way he wanted it to go. Derek wrote the song 100 numbers about this time in his life, like having all these numbers in your phone and all these facebook friends, but at the end of the day he was missing home life, so he decided to move back home.


Derek says he grew up listening to country music and playing it came natural to him,
his favorites were Garth Brooks, Johnny Cash and Kenny Rogers. Derek's pop career started when he was 17 years old in Dublin while he was still at school. As soon as his school exams were over himself and the rest of the boys jumped on a plane and headed for London and got signed up to Warner Music.
The group done all the big stages in England including Top Of The Pops for The B.B.C. They also done a tour of Europe including Germany and Sweden. The group had a number 1 hit song in Japan. They headed to America for some recording work, Derek says it was a bit of a roller coaster experience at the time, living the
Rock And Roll life style.
After his pop group broke up Derek went back to collage for more studies but was still doing some gigs in London at that time. Most of the songs from his first album were written while he was living in London but it wasn't until he returned to Ireland that he released the album Country Soul. 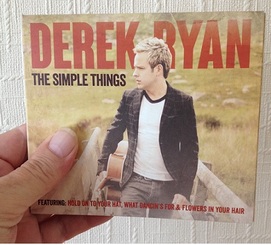 The Simple Things Album By Derek Ryan
Congratulations On The Biggest Selling Album Derek
The biggest selling album in Ireland for the week ending Friday the 5th of September 2014 was ''The Simple Things'' by Derek Ryan. I don't know how many records were sold to get the top spot in Ireland but I'm sure my little contribution helped in a small way.  yes I actually buy the C.D. rather than download from itunes.  You'll always get little bits of info. that you don't get from down loading when you get the C.D. into your hand. Derek has been promoting  this new C.D. for the past 2 weeks by visiting record shops around the country and signing copies. Derek does deserve all of his success he receives. He's one of the hardest working musicians / songwriters in Ireland today. Himself and the band are constantly touring and when Derek's not on the road he's writing and recording new songs. And by the way, when we say the ''Biggest Selling Album'' this includes genre of music, not just country.

The most popular song lyrics on this site for Derek are 1 God's Plan 2 Life Is A River 3 A Mother's Son 4 Dreamers And Believers.
I think Derek and his band are absolutely brilliant and the music they play and sing is fabulous.
I read that he studied Physics and maths in University exactly what my son does
I love to watch him performing on You Tube his video's are first class and I wish him all the very best of health success and hope he continues to stay at the top of his profession.
He is one of the very best performers around today
He writes and sings some beautiful songs. Dennis Patrick Robson.

I only recently discovered Derek. my parish priest suggested i listen to Gods Plan,which i did.said it would suit my voice. not sure about my voice but i
love the tone of derek voice , he makes it sound effortless.

my favourites are: sixty years go.hold onto your hat. gods plan What a find . keep up thIs good work and best wishes Liz 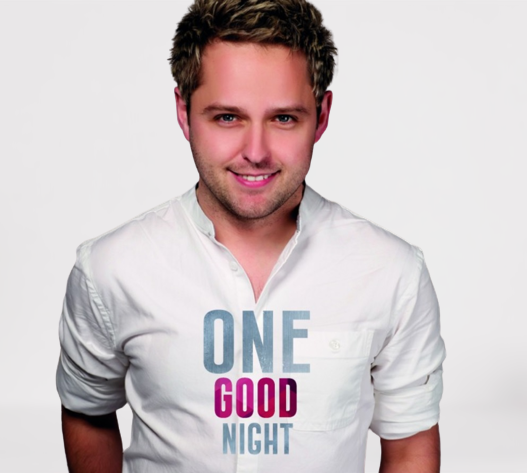