Learning To Play The Tin Whistle

In total there are about 90 video lessons on this site which include the easy to follow letter notes. On this page I give just a hand-full of links to some of those easy to learn songs.
Learning The Tin Whistle, here's a few of my own videos to help you learn how to get started playing tin whistle music. Most of the songs are easy to play along with. Just the first verse is played unless there's a chorus, otherwise the song repeats itself for all the verses.
The whistle I use is a Susato in the key of D and is made from plastic. Some of the songs here already have the sheet music in the sheet music section, others don't. There are nearly 40 videos now on the site showing you the basics and a bit more. There are thousands of visitors who come here to learn the notes, most are complete beginners, for this reason I have compiled many easy to read songs with the tin whistle ''Letter'' note above the lyric of the song and all have a youtube video showing the music being played. If your going to buy a book then please consider my Tin Whistle Songbook . If you would like to have your video displayed on the site then let me know. Keep in mind the learners who just want to play the song without too much ornamentation.  Easy To Play Tin Whistle Songs section is for complete beginners.
If you are only starting to learn the whistle I would recommend an easy song to begin with for obvious reasons. It's pretty much the same as any instrument starting out. If you were learning the piano you wouldn't start with ''Rachmaninoff third piano concerto'' . It's the same with the penny whistle. Most of the Childrens Songs here on the site are handy to play when starting out, so that's where I'd recommend you to start. Pick one that your familiar with. Learn it one line at a time and then put the whole thing together.

After you have mastered the Childrens songs I would then have a go at Come By The Hills, you will have learned a lot from the kids section and know where each note is on the whistle. Don't be tempted to try and play the difficult stuff before you are ready, it can be frustrating but you must be patient. After Come By The Hills try another that's not too hard, such as My Heart Will Go On which is very basic. Two more easy ones to learn and are not even folk songs are Love Me Tender and Wooden Heart. After you have learned these and really know them off by heart it would be time to try the intermediate songs such as Dirty Old Town and The Star Of The Co. Down. If you follow this advice you won't be so frustrated to the point of giving up.

Don't worry if it's not comming to you right away as it's the same for everbody. One of the greatest things about learning how to play the whistle is that you can take it with you to work/school. When I drove for a living I used to keep a spare whistle in the car and during breaks I'd practice a couple of songs. Even the couple of extra minutes a day makes all the difference.
The first written piece of musical notation to appear in Ireland comes from the 12th century and Staff notation has been available to buy since the 18th century. These were written mainly for piano. Tin Whistle ''Tabs'' didn't appear until much later as the instrument was not widely used. Many traditional musicians today can read music thanks to the first publication of Francis O'Neill's wonderful collection of tunes in the first part of the 20th century.

For the vast majority of traditional musicians the use of sheet music is only a guide for getting the basics of the tune off. Centuries before books came about the tunes were passed on orally and even the musicians that do read sheet music still find that listening to a tune played at a session will give them a feeling for a tune, such as  variations in the melody and timing. The ornamentation of a tune is hard to capture through notation alone.

The introduction of charts showing where to place fingers on the holes of the whistle were a God-Send for many whistle pupils and has certainly increased the number of people taking up the whistle. Lets face it some people just haven't got the ear for picking up a tune and relay on the written notation. Some of these people go on to develop an ear for music after spending some time reading the tune from sheets. So this is a good thing and should be encouraged, although some music teachers  frown upon learning by reading music. My position is that what ever system works for you to learn how to play the whistle or any instrument then go for it.
So Which Key Of Whistle Should I Use ?. The most popular one is in the key of D as a lot of the tunes at sessions are played in the key of D. A lot of the songs here are played in the key of G on a whistle that's in the key of D. It all depends on where the last note of the song is and what note you start with, for example if the song has a low C or B you won't be able to play it unless you fake it because you'll run out of notes on the whistle because the lowest note on the D whistle is a D.
If you just play at home for your own enjoyment it doesn't matter which key of whistle you use. I find the small G whistle an excellent choice when playing without others as there's a lovely sweet sound from it which sounds very like a Piccolo.

Getting back to what key of whistle to use, as I said at sessions they like to play tunes in D. But as this site caters mostly for songs rather than tunes and when playing in a group it's best to have several whistles in different keys. If you've ever being to gigs where ballads are played you'll notice the tin whistle player changing whistles for various songs. Take The Wolfe Tones for example, Tommy Byrne plays a lot of songs in the key of F, so there no way that Noel would be using a D whistle if the Singer is singing in the key of F. Noel Nagle changes whistles continuously during the gig depending on the key the singer feels comfortable singing a particular song. So sessions of traditional music are a different ball game altogether than singing ballads.

Whistles come in different keys. For example, the D whistle's lowest note is the D and the lowest note on the G Whistle is G and so on Below are the most popular whistle keys shown the fingering position. If you're playing any of the songs on this site and using the basic letter notes then remember that these letter notes are made up for the D whistle.
There's also included another section on this site that only uses music letter notes which you should be used to if you have played a few of the songs from this page. 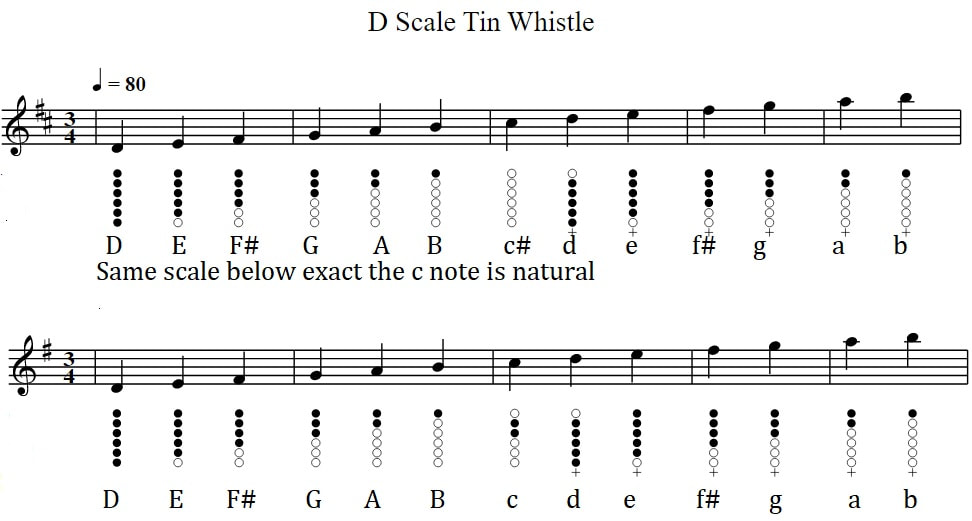 Tin whistle scale of D For beginners
Below is the list of sheet music and tin whistle songs that are in my ebooks. This is the largest collection of tin whistle songs ever put together.[over 600 songs ] Including folk, pop and trad tunes plus German And French songs along with Christmas Carols.
All of the songs have been made as easy to play as was possible.
​The price of the ebooks is €7.50 and  will be emailed to you after payment. Please be patient.