These songs are for the complete beginner of the Tin Whistle or those who used to play and forget the basics. I would advise you to learn these songs before moving on to the other songs on the site. I have included a youtube video where I slowed down each song so you can follow each note I'm playing. Practise makes perfect and if you learn each line at a time you'll be up and running in no time. If your an adult, don't be afraid to play the childrens songs such as Bah Bah Black Sheep, we all have to learn the basic songs before moving on. If you haven't already been using this site you won't know the way I write the notes out, so let me explain. The notes I place over the words of the songs are in either CAPITAL LETTERS or lower case. The capital letters are for playing the notes up as far as the B and the small letters are for the one's past the b. To play the high notes such as the d and e just blow a little harder on your whistle. A little tip I tell everybody when learning a new song is to play the first line until you know it off by heart before moving on to the second line. Play the second until you have it of. The same for all the other lines. Then put the whole song together and play them till you have them off. Keep at it and never give up as you will get there in the end. Take it nice and easy.
​Below is the list of sheet music / tin whistle notes with lyrics for the PDF Ebook of pop songs. All songs are in standard tin whistle sheet music and there's an example of how they look below.
The ebook cost €7.90 and I'll send the download link to you after purchase. 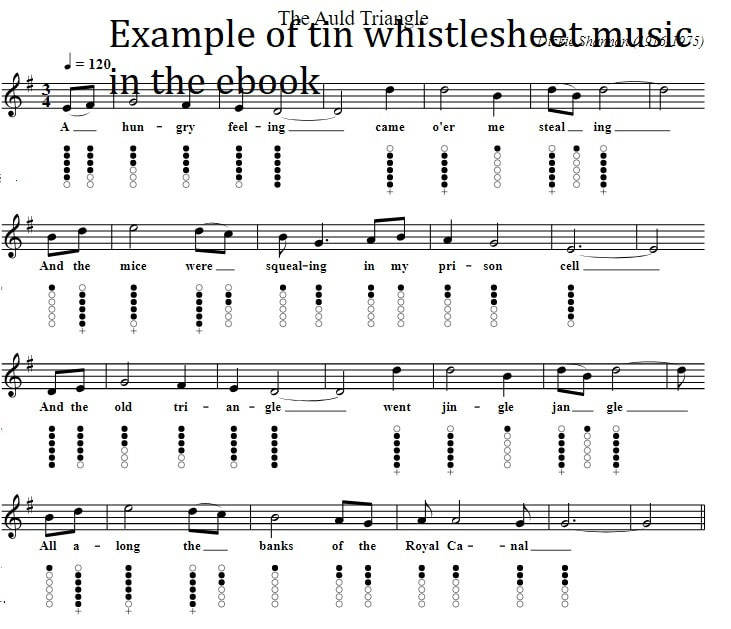