Recorded by The Dubliners [ lyrics ] and by Sullivans Gypsies who later changed their name to Ryan's Fancy, as far as I know the song is traditional and variations of the song can be found in many countries including Scotland and Canada, the version here is the Dublin version that takes place in Ringsend. The term ''Traditional'' has being placed on many songs on this site, what's really meant by the label ''Traditional'' in the music scene is that the song writer is unknown or that the song is out of copyright or never was copyrighted in the first place. On most folk albums you will also see in the credits the term trad/arr. which mean the song is traditional and the particular arrangement is by that singer/band. Tommy Flanagan is said to have written this song to the tune of Mrs. McGrath, Tommy says he wrote in down the back of Breens record shop and sang it for the first time at a Fleadh Cheoil in Thurles. Tommy was a comedian around Dublin in the 60's who also starred in The Italian Job.
Other songs about Ringsend In Dublin is Ringsend Rose By Brendan Grace . 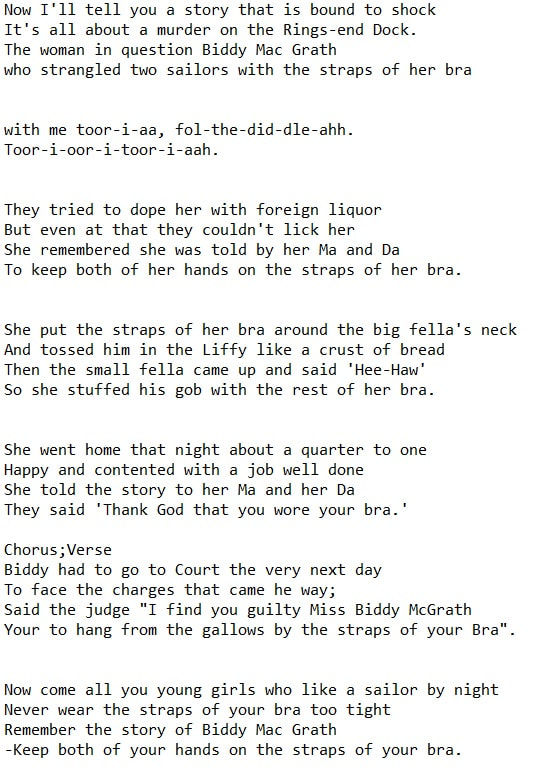 
They tried to dope her with foreign liquor
But even at that they couldn't lick her
She remembered she was told by her Ma and Da
To keep both of her hands on the straps of her bra.


She put the straps of her bra around the big fella's neck
And tossed him in the Liffy like a crust of bread
Then the small fella came up and said 'Hee-Haw'
So she stuffed his gob with the rest of her bra.


[G]She went home that night about a quarter to one
Happy and contented with a job well done
She told the story to her Ma and her Da
They said 'Thank God that you wore your bra.'

Chorus;Verse
Biddy had to go to Court the very next day
To face the charges that came he way;
Said the judge "I find you guilty Miss Biddy McGrath
Your to hang from the gallows by the straps of your Bra".


Now come all you young girls who like a sailor by night
Never wear the straps of your bra too tight
Remember the story of Biddy Mac Grath
-Keep both of your hands on the straps of your bra.
Below is the PDF Ebook of folk songs lyrics and chords. The songs are in 3 different keys, There's over 500 songs in the ebook. Most have only 3 easy chords.
​Price €8.90 . I'll email the ebook after payment.