The sheet music for the tin whistle is included.An Irish patriotic / rebel song by Derek Warfield [ Wolfe Tones ] wrote the song. This song got to No 1 in the charts with no air play from Ireland's national radio station R.T.E. and even when it reached No 1 they still refused to play it. The song is about the Malvinas / Falklands war between Britain and Argintina in 1982. 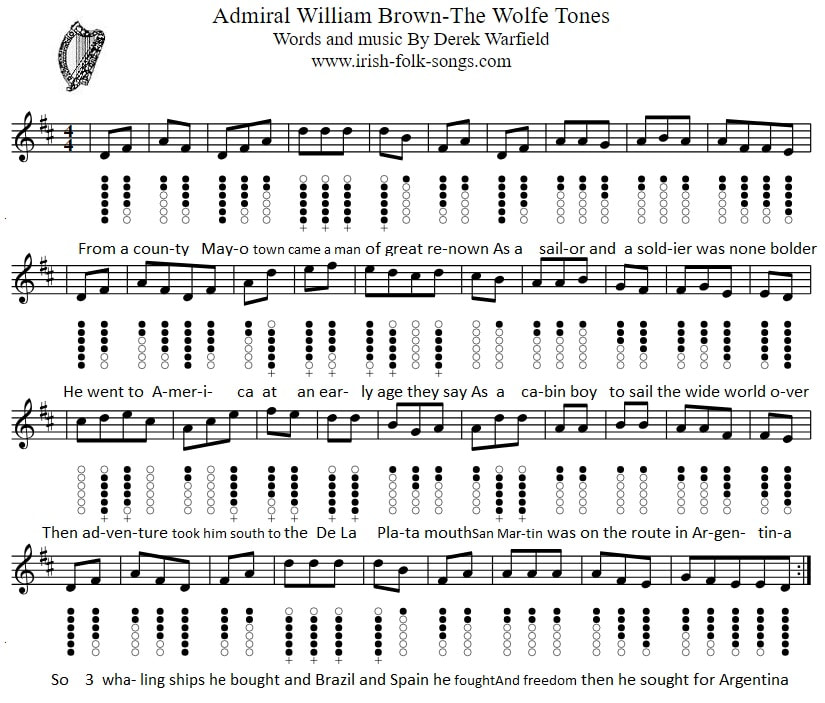 The following version is the original that was released as a single, notice the 2nd verse which was later left out of the following albums.

ADMIRAL WILLIAM BROWN
From a County Mayo Town came a man of great renon As a sailor and a soldier was none bolder
He went to America at an early age they say
As a cabin boy to sail the wide world over
Then adventure took him South to the Del La plata mouth San Martin was on the rout in Argentina
So three whaling ships he bought and Brazil and Spain he fought  And freedom then he sought for Argentina.


Oh where were you William Brown when your counry let you down Las Islas, Malvinas, Argentina
You would turn o'er in your grave, see the Irish still ere slaves
While Britannia rules no waves in Argentina
You would sing and shout out loud Buenos Aires you'd be proud
Las Islas, Malvinas, Argentina
Now the Empire's tumbling down and the Paddys back the crrrwn Oh they've let old Ireland down and Argentina.


He had heard of Irish hands in the noble gallant bands That helped to free the land called Argentina
We have heard of great acclaim, the Patricio's name and iomu When in Eighteen Six the British came for slaughter
And to this very day in the Argentine they say
The English ran away from Buenos Aires
To the islands further down and they took them for the Crown Las Islas, Malvir.as, Argentina.


Now Admiral William Brown now your navy's fully grown And you have taken back the Islands for your country
they had taken them by force, give them back in their due course And in Ireland there are some that don't forget you, And the people that went to to the Argentine with you To escape the English laws and wars and famine they have proved a loyal crew just like all the Irish do Las Islas, Malvinas, Argentina.


The old colonial days and the cruel English ways
With her thunder, plunder we will leach the natives
For the Brits are going to war just like Whitclock did hclore With her ships and guns and drums and Ilags and banners In the Empire days of old when they murdered for the gold And paraded it around the streets of London
Oh no human rights were given to the natives dead of livin Las Islas, Malvinas, Argentina.


In the Argentine he died, Father Fahy by his still! Fifty seven was the year his country mourned hen A hero of his nation he's remembered with elation Throughout this world where freedom still nhrrun I.
And the Southern Cross take note where Hull Willy Bulfin wrote The Irish still support you Argentina
With the Empire tumbling down let no Paddy's back the crown Las Islas, Malvinas, Argentina