Words and music by Barney Rush and Paul McCormack, from the Christy Moore album ''Folk Tale''. The guitar chords are the same as The Craic Was 90 song which was also written by Barney Rush.The sheet music and tin whistle notation are included.

[G]When we got our redundancy, myself and the lads went on the spree
A [D]brand new passport in my hand as [G]we took off for The [C]Netherland
[G]Myself and Dinny and O'Dwyer and Scut at Schiphol we were all half cut
We [D]opened up the duty-free, the red [G]lemonade and [C]brandy
And [D]we jumped on board a tram
O The [G]Weekend that we [D]spent in Amster[G]dam

Our first stop was the coffee shop, in we went and we all sparked up
Hashish from Pakistan, Morocco, Nepal and the Lebanon
All the boys was rollin' joints, they forgot to drink their pints
Water pipe came bubblin' around, took one pull and hit the ground
Lads wake him if you can
O The Weekend that we spent in Amsterdam

Sunday we went to The Blarney Stone, Paddy Wynne had The Leinster Final on
The Lily Whites and The Boys in Blue, the Majors and Taytos
Over to Mulligan's for the night, the bar was leppin' and the band was shite
De Burgh, De Bono and De Wolfe Tones'til Dinny grabbed the microphone
And gave us Van The Man
O The weekend that we spent in Amsterdam

Then we went for a midnight walk, all our eyes were out on stalks
Gay bars, bordellos, models in the windows with no clothes
Dinny he danced all night with a South American transvestite
Everything was goin' grand until Dinny tried to drop the hand There was pandemonium
0 The Weekend that we spent in Amsterdam

The bouncer she was 5' 10", Lowland Heavyweight Champion
She hit Dinny an awful box, the boys ran amok and wrecked the shop
We could hear the squad cars getting near, it's time lads we were out of here
Dinny pulled up his tights and we disappeared into the night
All together now one by one
0 The Weekend that we spent in Amsterdam

Queen Beatrix she rides her bike, Rembrandt is hangin' down in The Rijk
Ajax, Heineken, Van Gogh, The Gargle and The Ghanja
Monday morning we were all half cracked we dived into the Kaisergracht
They fished us out, hosed us down and put us on the plane to Dublin Home to the Mammy again
0 The Weekend that we spent in Amsterdam 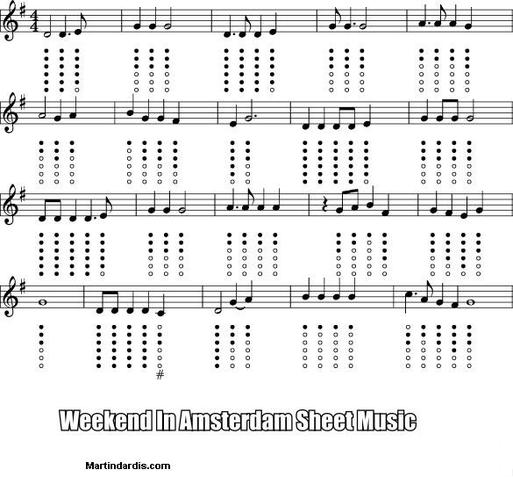