The Men Of The West lyrics and guitar chords

written by William Rooney. recorded by The Clancy Brothers And Tommy Makem. Included is the sheet music and tin whistle tabs.

The hilltops with glory were glowing. ‘twas the eve of a bright harvest day,
When the ships we’d been wearily waiting sailed into Killala’ broad bay;
And over the hills went the slogan, to waken in every breast
The fire that has never been quenched, boys, among the true hearts of the West.

Killala was ours ere the midnight, and high over Ballina town
Our banners in triumph were waving before the next sun had gone down.
We gathered to speed the good work, boys, the true men anear and afar;
And history can tell how we routed the redcoats through old Castlebar.

And pledge we "The stout sons of France", boys, bold Humbert and all his brave men,
Whose tramp, like the trumpet of battle, brought hope to the drooping again.
Since Éire has caught to her bosom on many a mountain and hill
The gallants who fell so they’re here, boys, to cheer us to victory still.

Though all the bright dreamings we cherished went down in disaster and woe,
The spirit of old is still with us that never would bend to the foe;
And Connacht is ready whenever the loud rolling tuck of the drum
Rings out to awaken the echoes and tell us the morning has come.

So here’s to the gallant old West, boys, Which rallied her bravest and best
When Ireland was broken and bleeding; Hurrah, boys! Hurrah for the West!

The Men Of The West Sheet Music 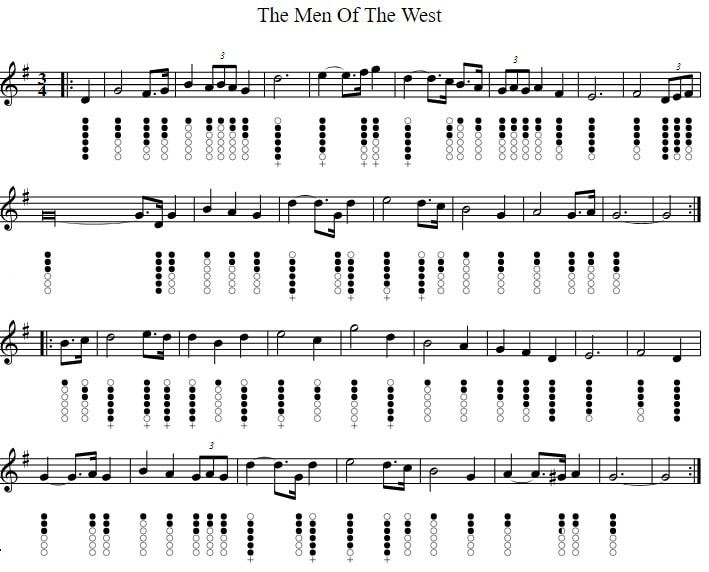