Along with the guitar chords the 5 string banjo chords plus the 4 string tenor banjo chords are included.The youtube video version is by ''Tickle The Pig'' . The lads sing this one using slightly different lyrics than I have given. The guitar chords are in chordpro. Also recorded by The Dubliners, The Clancy Brothers, Offaly Man Johnny McEvoy and The Pogues who recorded it using just guitar and vocals on their ''B Sides'' album. Included are the chords as played by The Dubliners. An English folk / sea shanty song.​ The leaving of Liverpool tenor guitar / mandola tab in CGDA added. 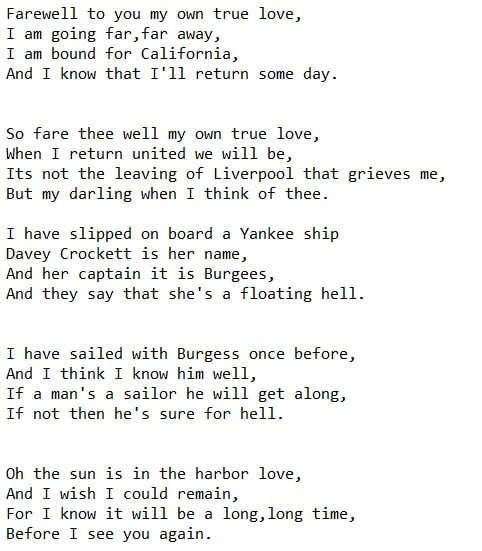 [2]
I have slipped on board a Yankee ship
Davey Crockett is her name,
And her captain it is Burgees,
And they say that she's a floating hell.

[3]
I have sailed with Burgess once before,
And I think I know him well,
If a man's a sailor he will get along,
If not then he's sure for hell.

[4]
Oh the sun is in the harbor love,
And I wish I could remain,
For I know it will be a long,long time,
Before I see you again.

The Leaving Of Liverpool Sheet Music And Tin Whistle Notes

​Included below is The leaving of Liverpool tenor guitar / mandola tab in CGDA. Can be used on flute and accordion.

Here's the chords as played by The Dubliners.

Liverpool docks England
​​Below is the ebook list of Irish Folk Songs with guitar chords
in 3 keys. Price €8.90 and I'll email the ebook after purchase .
​The chords are suited to ukulele, banjo or mandolin also.
Martin