Song Of The Dawn, Irish lyrics and guitar chords

Written by Brian Na Banban, I came across this one in an old Irish book called ''Songs And Recitations Of Ireland'' , It was recorded by The Longkesh Ramblers, The Go Lucky Four in 1967 on the album ''Irish Capers'' which included half of the song being rebel and the rest being standard folk song. Included on the album was God Save Ireland Song .  Also recorded by Kathleen Largy who's also known as being an ''Irish ballad singer'' and one of Kathleen's better known ballads is The Snipers Promise Song .The sheet music notes for Song Of The Dawn are included in the key of F and also G Major.
Song Of The Dawn Song Words

The song I sing is a song of home, A song of Roisin Dubh.
Of glade and glen, of ford and fen,
Of lake and mountain blue.
Of signs that stand over all the land, To tell of the long ago.
Let your voices ring in the song I sing -
Sean-Eire na nGaedheal go deo!
Hurrah! The night is ended,
We see the dawn's red glow;
Oh, shout it high, 'tis a freeman's cry Sean-Eire na nGaedheal go deo!

I sing of every wood and stream,
Of tower, and vale, and town.
When brave men died, where brave men tried To tear the red rag down.
From Cilarraidhe brave to the widest wave Where Lagan's waters flow,
From Teamhair na Riogh to the winding Laoi Sean-Eire na nGaedheal go deo!

I raise a rann for the ones who tread
The path to the dawning day.
Who will pause no more till their native shore, Is free from the Saxon sway;
Till from every hill and from every rill The freedom-cry shall go,
From old and young, in the Gaelic tongue —Sean-Eire na nGaedheal go deo! 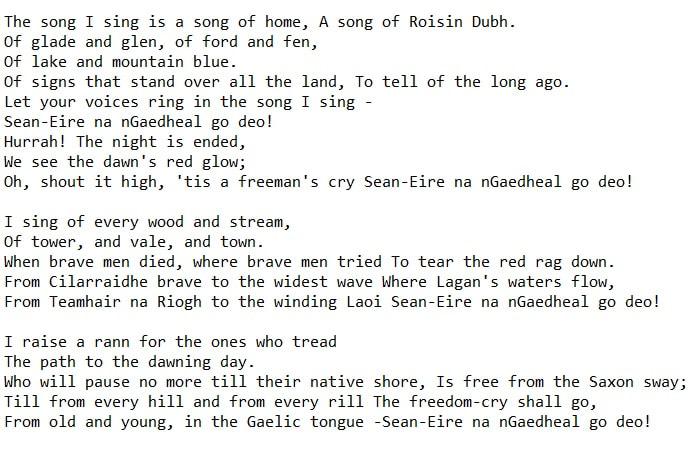