Scorn Not His Simplicity Lyrics And Chords

The tin whistle sheet music notes are included. Recorded by The Dubliners with Luke Kelly on vocals. Also by Simon Casey, Sinade O'Connor, Written By Phil Coulter,Here is another classic from The Master Songwriter
Phil has written many beautiful songs including-The Molly Maguires-The town I loved so Well and many pop songs also. This song is about Phil's son Paul Coulter who was born with Down's Syndrome. It so happened that at the same time Phil was producing the Dubliners, and Luke Kelly picked up on the song. Luke didn't preform the song with any of the Dubliners gigs as he didn't think the Dubliners audience would get the song. In a recent interview for Irish T.V. Phil said if there were any two songs he's like to be remembered for it would be The Town I Loved So Well and Scorn Not His Simplicity.Did you know that Phil wrote most of The Bay City Rollers hits ? The video is from 'The McCann Man [Jim McCann from the 70s , I think it was recorded in the Embankment Tallagh Dublin. The chords that I have set the song in are the same as the Luke Kelly version.Irish country singer Mike Denver recently recorded the song. Return to The Dubliners Song Lyrics

Only he knows how to face the future hopelessly sournded by dispair.
He wont ask for your pity or your sympaty but surly you should care.

Some voices have an awesome but distant beauty.
They come to us from some other worldly
reface and even as they thrift and uplift us,
they remain somehow alien. The sound they make
is not one we could imagine emerging from our own throats.
We value their strange power,
her exotic charm: But some undertone within them whispers
of our own banal ordinariness.
they tardatise us with a perfection we can never share,
Even as they express out wildest hopes
and deepest despair, they remind us of our inarticulate selves.
Then again there are voices that are too familiar, too friendly
They make noises that we recognise.
We can feel at home in their comfortable banality.
But they quickly fade into boredom They have no strangeness,
no sense of aspiration. Even as we think 'I could do
that we also wonder why were listening to sounds we
could hear any aid trine. There is nothing being added to our world,
no new space being opened up for the imagination to play in
Very, very rarely: there is a voice that hovers with perfect grace
between these two states it is otherworldly but not alien.
it lifts us out of ourselves and takes us to places that we
recognise, Its perfection doesn't tantalise or pander, it simply connects.

it is strange commanding, majestic. But is speaks to us of ourselves.
it is a sound we might make if we were better. It articulates
the feelings we can't express, gives an epic twist to the drama of
ordinary lives. Luke Kelly  was one of those rare voices, and those
of us who heard it will never get it out of our heads. Luke embodied
something that runs through the culture of his native city a habit
of mind in which the ordinary is made heroic, it is there in  zozimus's
great song The Funding of Moses, where the Biblical tale in which an
oppressed woman outwits a tyrant and gets to keep her child is
enacted on the streets of Dublin:

Below is the sheet music notes for the tin whistle in the key of G. The notes are suitable for playing on a standard D whistle. 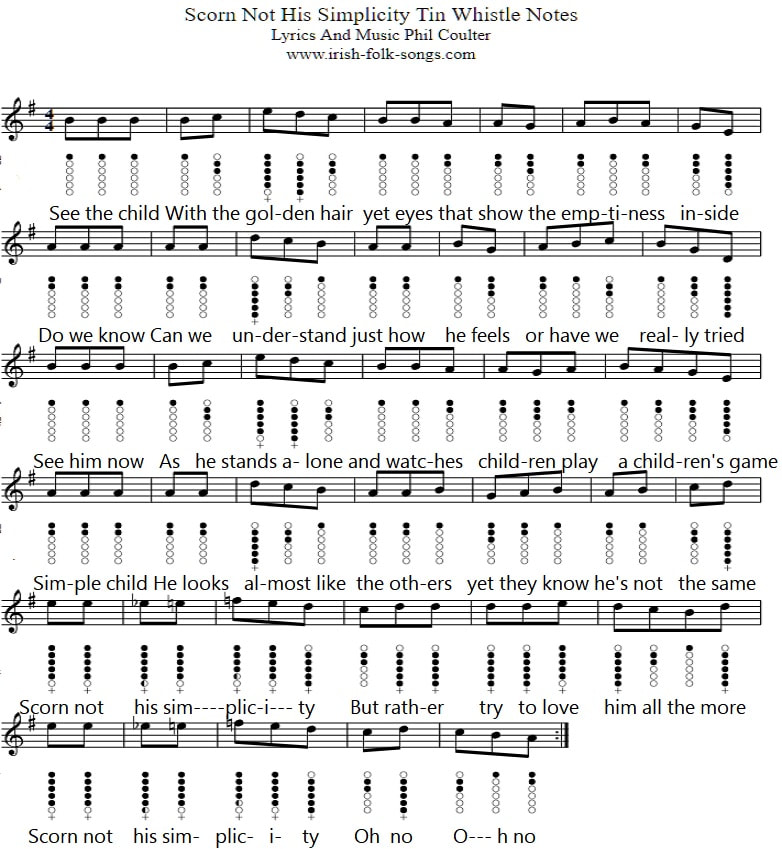