On Raglan Road lyrics and chords

On Grafton Street in November, we
Tripped lightly along the ledge
Of a deep ravine where can be seen
The worth of passion play.
The Queen of Hearts still making tarts
And I not making hay;
Oh, I loved too much and by such and such
Is happiness thrown away.

I gave her gifts of the mind,
I gave her the secret signs,
That's known to the artists who have known
The true gods of sound and stone.
And her words and tint without stint
I gave her poems to say
With her own name there and her own dark hair
Like clouds over fields of May.

On a quiet street where old ghosts meet
I see her walking now,
And away from me so hurriedly
My reason must allow.
That I had loved, not as I should
A creature made of clay,
When the angel woos the clay, he'll lose
His wings at the dawn of day. 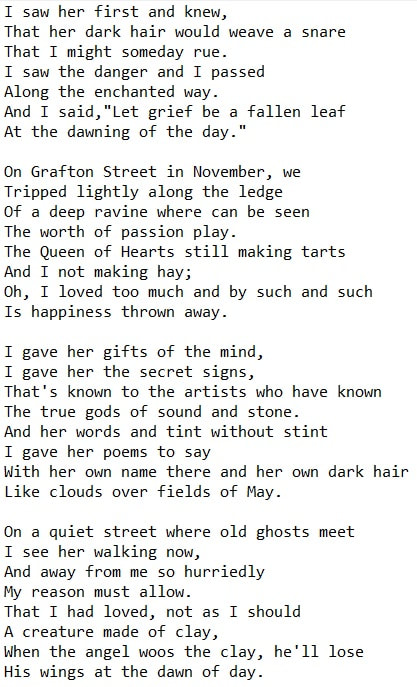 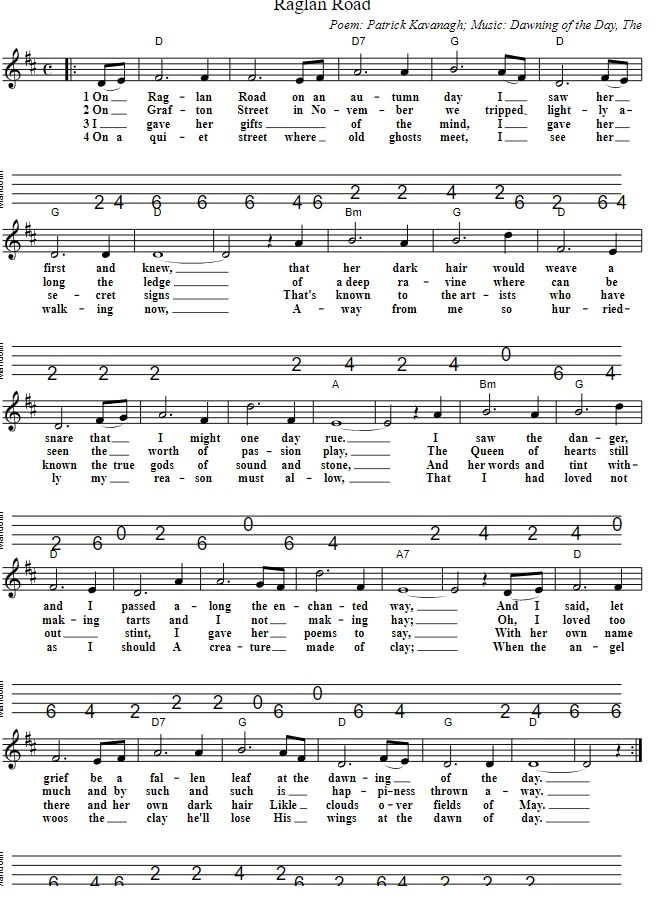 Luke Kelly version of the chords 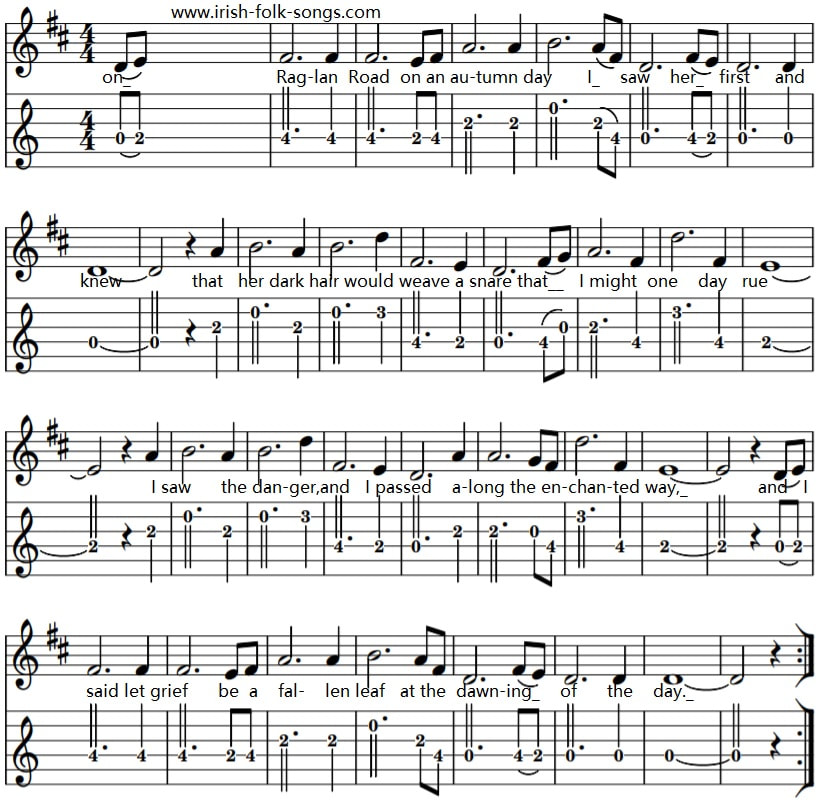 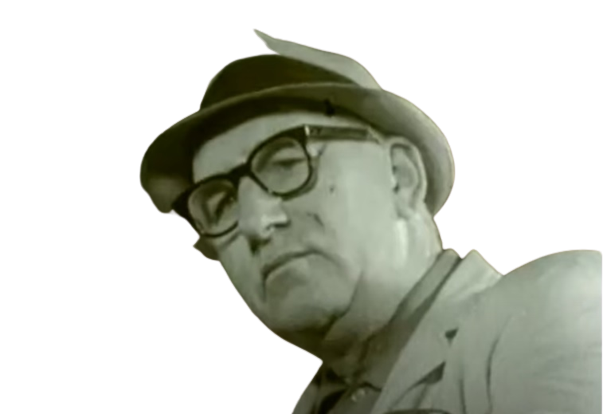 On Raglan Road
The Dawning Of The Day

The confusion caused by the two titles of this song can be traced back to the different previous history of the tune on one hand and the words on the other.

The tune, known as Fainne Gael an Lae, strictly meaning The Bright Ring of Day, probably originates from the seventeenth century blind Sligo harpist Thomas O'Connellan. In 1847 Edward Walsh scored an eighteenth century poem to this air and the song Fainne Gael an Lae, by then translated as The Dawning of the Day, was born. The popularity of this song rocketed when a masterly interpretation by the famous Irish-American tenor John McCormack, of the The Dawning of the Day was used in the 1937 film Wings of the Morning.
O'Connellan's air inspired not only Edward Walsh, but also Thomas Moore, when he sought music for The Minstrel Boy, as well as the author of The Ballad of William Bloat, Raymond Calvert.
In 1909, to make thing even more complicated, Cicely Fox Smith published a poem entitled At the Dawning of the Day. Apart from some phrases this poem has little to do with our subject, although it is not entirely unthinkable that Patrick Kavanagh at least knew this poem.

​Here are the guitar chords in the key of G.


​[G]On Rag[Am]lan [G]Road of an Autumn[C] day
I[G] saw her first and knew,
That[C] her dark [Em]hair would[G] weave a snare
That I might someday[D] rue.
I[Em]saw the danger[G] and I passed
Along the enchanted[D] way.
And I[G] said,"Let grief be a fallen[C] leaf
At the[G] dawning of the[G] day."
​Where is Raglan Road ? Raglan Road is in Ballsbridge Dublin 4. The street is in an old part of Dublin with a mix of Georgian houses and offices. The road also has a couple of foreign embassys. Raglan Road is one of the most expensive places in Ireland to buy property.
Who sang the song ? Raglan Road was first recorded by Luke Kelly with The Dubliners. But obviously it was first sang by Paddy Kavanagh since he wroth the song.
It was later recorded by many singers and bands including Sinead O'Connor, Mark Knopfler, Van Morrison, Loreena McKennitt, Cristin Milioti, Mary Black,  The Chieftains with Joan Osbourne on vocals , Niamh McGlinchey, Donna Taggart, Glen Hansard, Maurice Dickson plus many more
​The following comes from a T.V. interview Luke Kelly gave about getting the song from Patrick Kavanagh.

On the one occation that I actually dared to speak to the man, 'cause as Ben said earlier on ''He Was A Rough Sort Of A Man. We were in the Baily Pub and he [ Patrick Kavanagh ] was singing in his own peculiar manner and so was I, and he said ''I've Got A Song For You'' and he said ''You Should Sing Raglan Road'' and I'm very proud of the fact that I got the song from the man himself.
Most likely with knowledge of Walsh's song The Dawning of the Day and Smith's poem At the Dawning of the Day Patrick Kavanagh wrote a poem entitled Dark Haired Myriam Ran Away. This poem, which was published in 1946, seemingly referred to an unrequited love of Patrick Kavanagh. The words however don't give a clue about her name and like a true gentlemen he never consigned the lady's identity.

Kavanagh's poem led a forlorn existence on dark bookshelves until Patrick Kavanagh and Luke Kelly of The Dubliners, at that time novices in the music scene, treated each other with their talents during a joyful pub session somewhere in the 1960's.
The exact course of this gathering is vague. Some assume that Kavanagh recited his poem Dark Haired Myriam Ran Away and that Kelly set it to O'Connellan's air. Others, among them Luke Kelly himself, state that Kavanagh already had set the poem to the air. Anyway, Patrick was impressed by the musical talents of Luke Kelly and he gave him permission to use the song. For some reasons The Dubliners didn't use the original title of the poem and because there was already a song entitled The Dawning of the Day they came up with On Raglan Road. 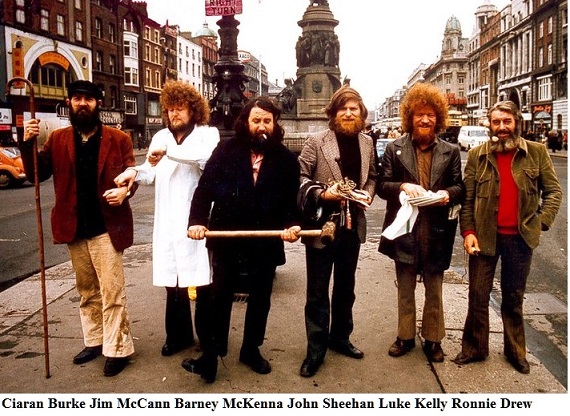 Great story and great poetry and of course a wonderful song . It takes me back to my native city in a way few other songs do . Luke was definitely one of our greatest folk singers .
Eddie Reddin