The Dubliners song lyrics, Written by Dominic Behan. The 5 string banjo chords are included in A Major. Guitar chords are in chordpro. This song is about Irishmen who emigrated to England to work on building sites and motorways. This one is normally associated with Ronnie Drew, but was also recorded by Luke Kelly in his hay-day and by Paddy Reilly, The Pecker Dunne, The High Kings, The Rumjacks and The Clancy Brothers. An Irish folk song. McAlpines Fusiliers Sheet Music Notes . 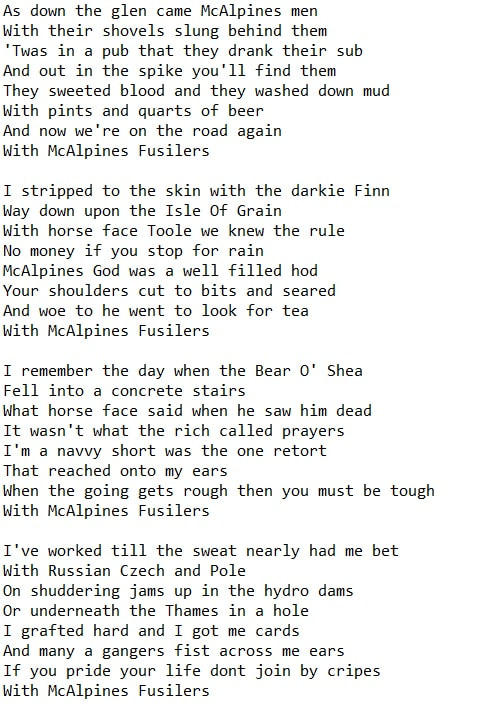 It was in the year of 39 when the sky was full of lead.
When Hitler was heading for Poland and Paddy for Hollyhead.
Come all you pincher laddies and you long distant men.
Don't ever work for McAlpine for Whimpy or John Lang.
For you'll stand behind a mixer till your skin is turned to tan.


And they'll say good on you Paddy with your boat fare in your hand
The craic was good in Cricklewood we wouldn't leave the Crown
With bottles flying and Biddies crying sure Paddy was on the town
Oh mother dear I'm over here and I'm never coming back
What keeps me here is the rake of beer the women and the craic.
As[A] down the glen came Mc[D]Alpines men
With their[A] shovels[E] slung be[A]hind them
'Twas[A] in a pub that they[D] drank[E] their[D] sub
And out in the[A] spike you'll[D] find them
They[A] sweeted blood and they[D] washed[E] down [D]mud
With pints and[A] quarts of[D] beer
And[A] now we're on the[D] road again
With Mc[A]Alpines[E] Fusi[A]lers

​​​Below is the list of sheet music and tin whistle songs that are in my ebooks. This is the largest collection of tin whistle songs ever put together.[over 800 songs ] Including folk, pop and trad tunes plus German And French songs along with Christmas Carols.
All of the sheet music tabs have been made as easy to play as was possible.
​The price of the ebooks is €7.50