This folk song was written by James Custer around 1880, about the famous Irish greyhound winning the waterloo cup, recorded by The Clancy Broyhers And Tommy Makem, the second version is in the key of Am and was sent in by Alda who has provided many song lyrics and chords to the site. Thanks Alda-The youtube video is by The Dubliners. The sheet music and whistle notes are included. Return to The Dubliners Song Lyrics

And when they arrived there in big London town,
The great English sportsmen they all gathered 'round.
One of the gentlemen gave it a ha-ha,
"Is that the great dog you call Master McGrath?"

Lord Lurgon stepped forward and he said, "Gentlemen,
If there are any among you have mondy to spend,
For your great English greyhound I don't care a straw,
Five thousand to one upon Master McGrath."

White Rose stood uncoverec, the great English pride;
Her trainer and owner were both by her side.
They led her away and the crowd cried "Hurrah!"
For the pride of all England and Master McGrath.

As Rose and the Master, they both ran along,
"I wonder," said Rose, "what took you from your home.
Hou should have stayed there in your Irish domain
And not come to gain laurels on Albion's plains."

"I know," said McGrath, "we have wild heather bogs,
But you'll find in old Ireland we have good men and dogs.
Lead on, bold Brtitannia, give none of your jaw;
Snuff that up your nostrils," said Master McGrath.

The heare she led on, what a beautiful view,
As swift ad the wind o'er the green fields she flew.
He jumped on her back and he held up his paw:
"Three cheers for old Ireland," said Master McGrath.

"I've known many greyhounds that filled me with pride
In the days that are gon and it can't be denied,
But the greathes and the bravest the world ever saw
Was our champion of champions, brave Master McGrath.
Master McGrath Key Of Am. 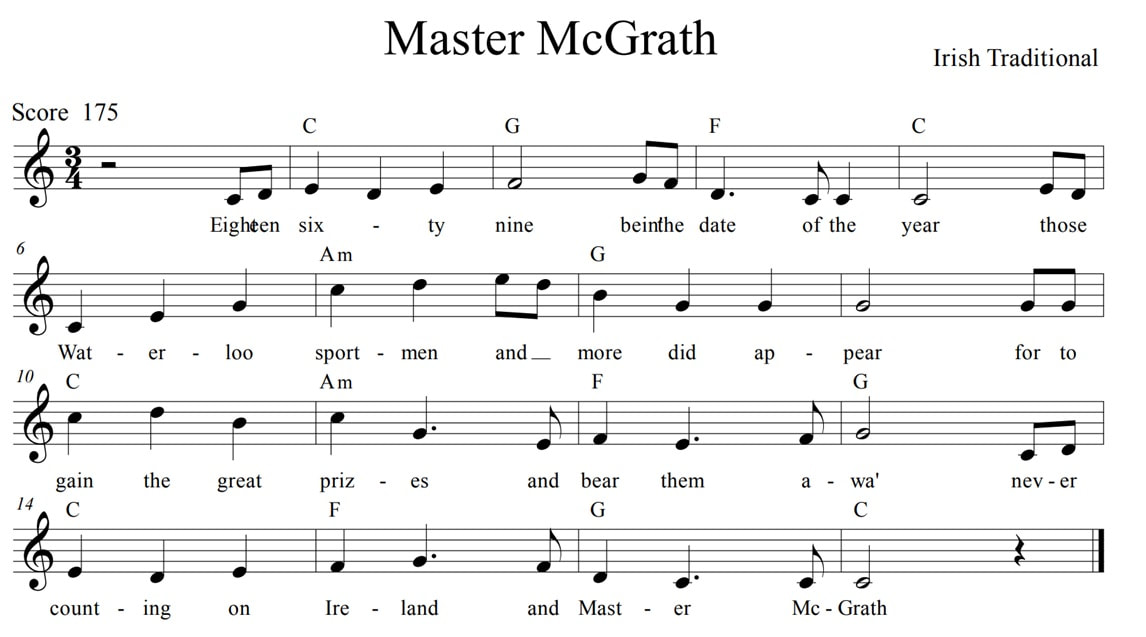