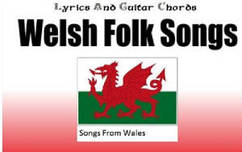 Welsh Folk Song Lyrics Plus Guitar Chords. This section of the website is dedicated to the great Welsh Folk singer Siwsann George who departed in May 2005 age 49

Just like Ireland, Wales is considered to be a Celtic country. This is largely because of its native language. Welsh along with Irish belong to two very distinct forms of the Celtic language. While related to the Gaelic language, Welsh, Breton and what's left of the Cornish native tongue are known as 'P' Celtic. Irish Scottish and Manx are what's called 'Q' Celtic, while the two groups share a basic structure in their language a native speaker from Ireland or Scotland would not understand them if a Welsh person was speaking in their native tongue..


If you would like to help in the expansion of this section of the site and know a Welsh song or two on guitar then please send them to me. If you have written a song in Welsh and want it included here send it to me and I'll place it on the site.