The Wind That Shakes The Corn Lyrics And Guitar Chords

The Irish Rovers, the tune of this song is very similar to The Homes Of Donegal and Tramps And Hawkers-Guitar chords by Alda. The song tells of a young man who leaves his sweetheart and fights for his country in the 1798 rebellion after the love of his life is shot dead by the British.
The song Boolavogue deals also with the events of the 1798 rising in Ireland. 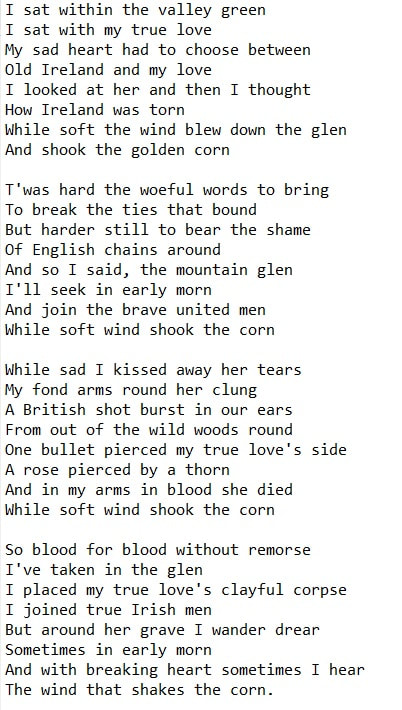 T'was hard the woeful words to bring
To break the ties that bound
But harder still to bear the shame
Of English chains around
And so I said, the mountain glen
I'll seek in early morn
And join the brave united men
While soft wind shook the corn

So blood for blood without remorse
I've taken in the glen
I placed my true love's clayful corpse
I joined true Irish men
But around her grave I wander drear
Sometimes in early morn
And with breaking heart sometimes I hear
The wind that shakes the corn.

TheWind That Shakes The Barley song lyrics is also on the site
and deals with the same rebellion of 1798.