The full sheet music piano score with letter notes is included in the key of D Major. The 5 string banjo chords are included.Recorded by The Clancy Brothers And Tommy Makem- Written by Francis McNamara, The Irish version is the one I have put chords to. The sheet music and tin whistle notes are included. Guitar chords are in chordpro. There are at least thirty six versions that I have come across while researching this song. Also recorded by Dr. Hook, The Irish Rovers [ lyrics ] and Mick Jagger from The Rolling Stones. The song featured in the movie The Quiet Man by John Ford. Another popular song that was in The Quiet Man is Mush Mush [ lyrics ] which was sang by the actor Barry Fitzgerald. It was sang in the pub about 10 minutes into the film with a man playing the accordion. Also recorded by Robbie O'Connell.​ The wild colonial boy easy beginner piano notes now included. 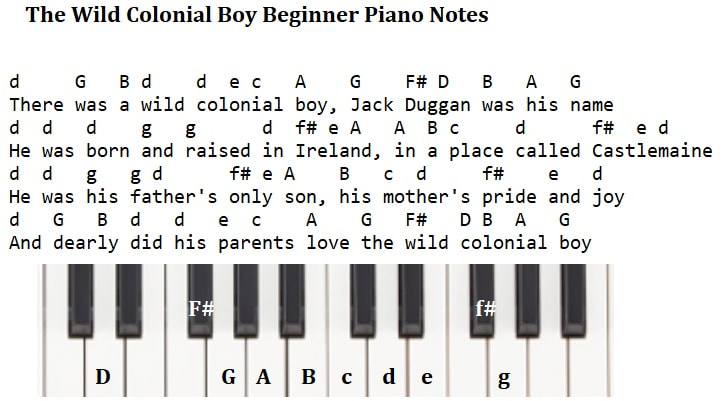 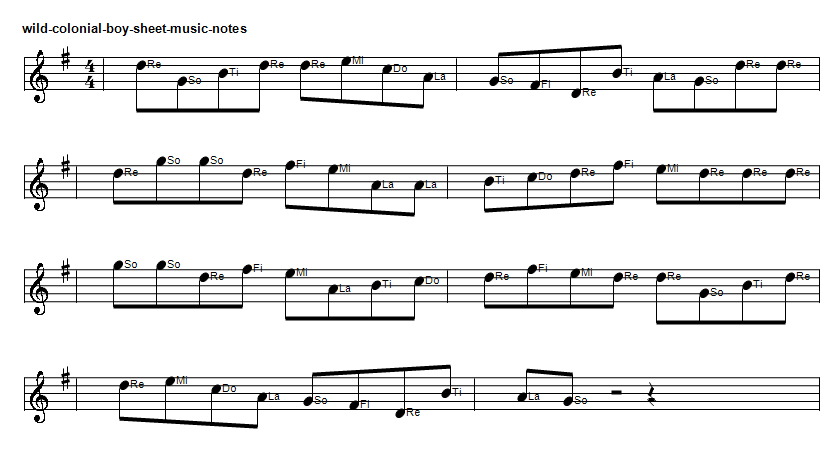 The Wild Colonial Boy 5 string banjo chords for the key of C Major. 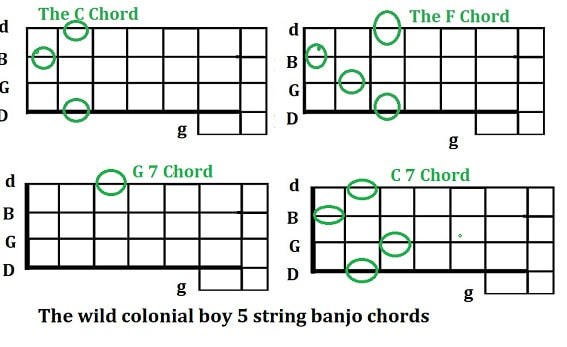 Below is the tin whistle sheet music for The Wild Colonial Boy in the key of G Major. 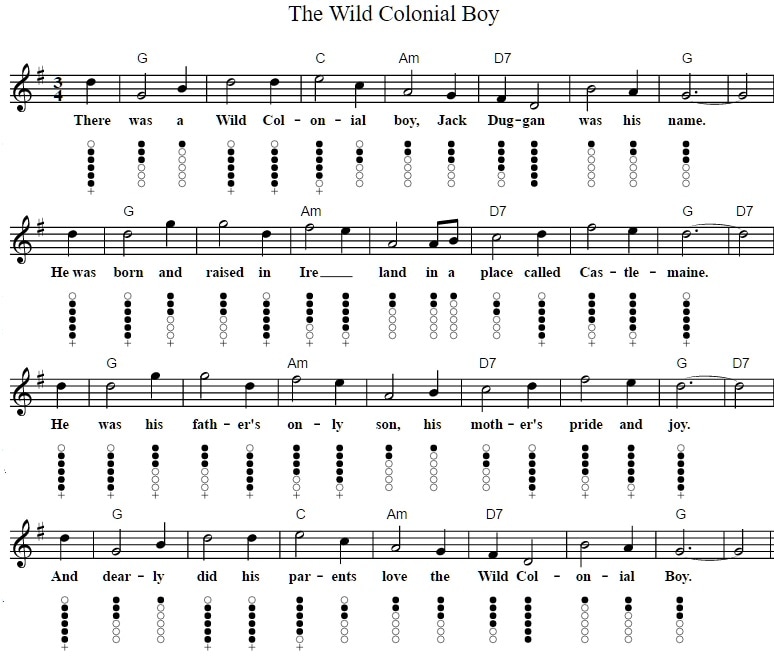 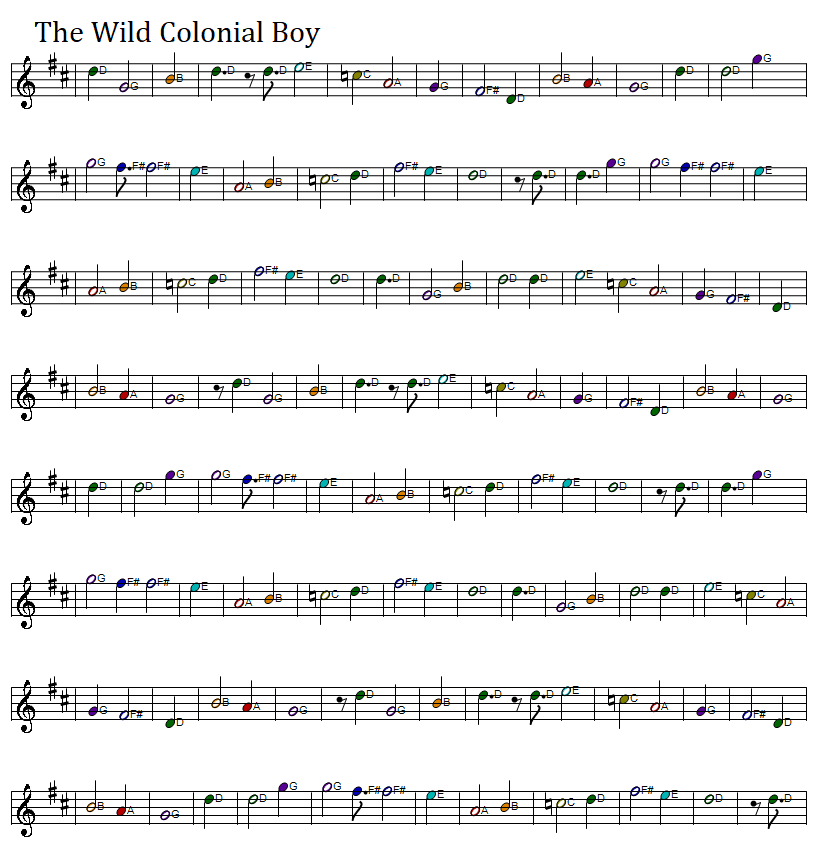 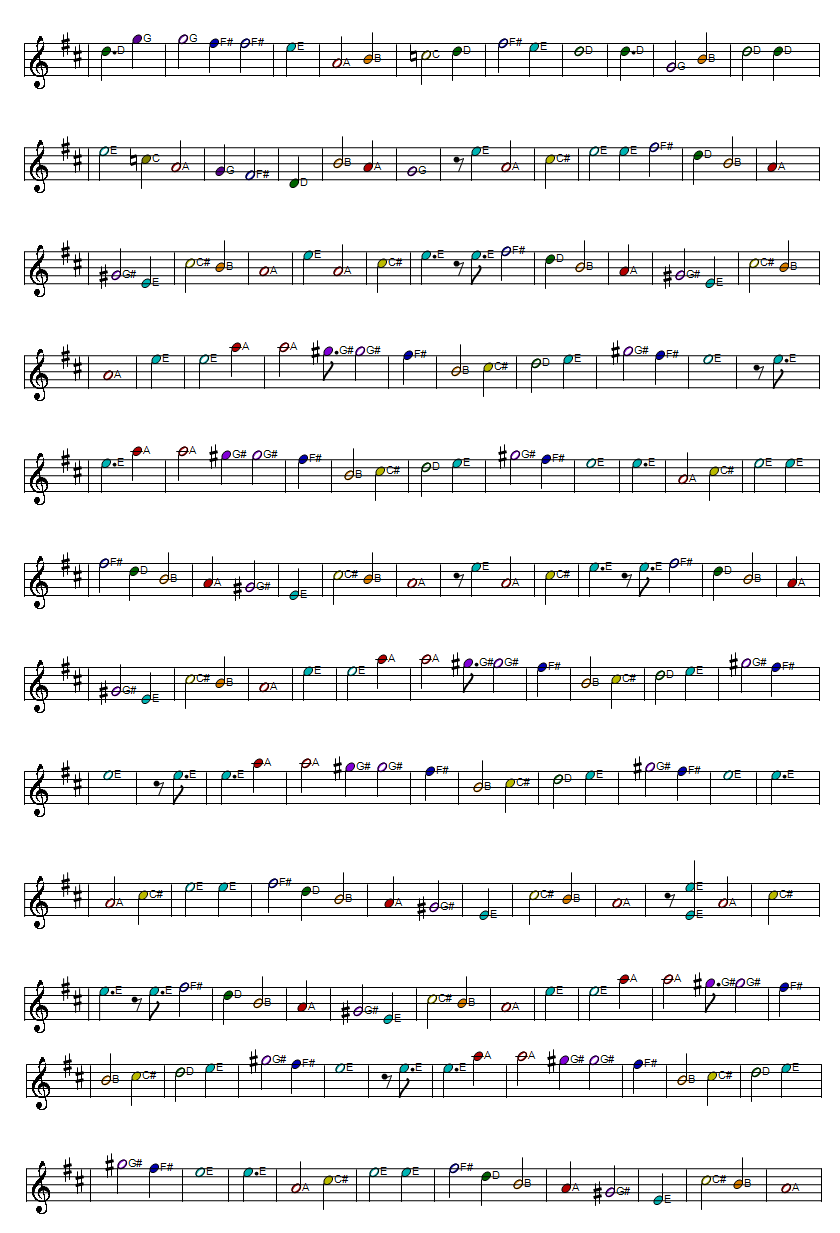 There was a wild colonial youth, Jack Donahue by name;
Of poor but honest parents he was born in Castlemaine.
He was his father's only hope, his mother's pride and joy,
And dearly did his parents love that wild colonial boy.
Chorus:
Then come all my hearties, well roam the mountains high
Together we will wander, together we will die,
We'll roam beneath the bluegums, and gallop over plains,
For we scorn to live in slavery, bound down with iron chains.

He was scarcely sixteen years of age when he left his father's home,
And through Australia's sunny clime a bushranger did roam,
He robbed the wealthy squatters, their stocks he did destroy,
And a terror to the rich man was the wild colonial boy.

One day as he was riding the mountainside along,
A-listening to the little birds, their pleasant laughing song,
Three mounted troopers met him, Kelly, Davis and Fitzroy,
And thought that they would capture him, the wild colonial boy.

He fired at trooper Kelly, and brought him to the ground,
And in return from Davis received a mortal wound;
All shattered through the jaws he lay, still firing at Fitzroy,
And that's the way they captured him, the wild colonial
boy.
Archdeacon version
He was a wild colonial boy, Jack Dowling was his name,
Brought up by honest parents, and born in Castlemaine,
He was his father's only son; his mother's pride and joy,
And dearly, dearly did they love this wild colonial boy.
Chorus:
Then come along my hearties, who roam the mountains wide,
Together we will plunder, together we will ride,
We'll ride o'er the mountains and gallop o'er the plains,
Before we'll die in slavery, bound down by iron chains.

In eighteen hundred and sixty three he commenced his wild career,
With a heart that felt no danger and a mind that knew no fear,
He robbed the mail coach on the beach with judge or viceroy,
And a terror to-Australia was the wild colonial boy.

As Jack went out one morning and gaily rode along,
Listening to the mocking birds pretty little song,
Approached three mounted troopers, Kelly, Davis and Fitzroy,
Who rode up and tried to capture him, the wild colonial boy.

"Surrender now Jack Dowling, you outlawed plundering son,
Surrender in the Queen's name for we are three to one".
Jack drew a pistol from his belt and waved the little toy,
Saying "I'll fight but not surrender, I'm the wild colonial boy!"

He shot the trooper Kelly, and laid him on the !ground,
Davis firing in return, received a fatal wound,
He fired another shot, which stretched out poor Fitzroy,
And that was how they captured him, the wild colonial boy.
A Gladys Scrivener version
In Dublin Town I was brought up, in that city of great fame,
My decent friends and parents they will tell to you the same;
It was all for five hundred pounds I was sent across the main,
For seven long years in New South Wales to wear a convict's chain.

Chorus:
Now come along my hearties, we'll roam the mountainside,
Together we will plunder and together we will die,
We'll wander o'er the valleys and we'll gallop o'er the plains,
For we scorn to live in slavery, bound down in iron chains.

I'd scarce been there twelve months or more upon the Australian shore,
When I took to the highway as I'd oft-times done before,
There was me and Jacky Underwood, and Webber and Walmsley too,
These were the true associates of bold Jack Donahoe.

Now Donahoe was taken all for a notorious crime,
And sentenced to be hung upon the gallows tree so high,
But when they came to Sydney gaol he left them in a stew
And when they came to call the roll they missed Jack Donahoe.

Now Donahoe made his escape, to the bush he went straightway,
The people they were all afraid to travel night or day,
For every day the newspapers had something published new,
Concerning this dauntless hero the bold Jack Donahoe.

As Donahoe was cruising one summer's afternoon,
Listening to the mocking birds, their pretty laughing tune,
When the sergeant of the horse police discharged his carabine,
And called aloud on Donahoe to fight or to resign.

He fought six rounds with the horse police until the fatal ball,
Which pierced his heart and made him start, caused Donahoe to fall,
And as he closed his mournful eyes, he bade this world adieu,
Saying, "Convicts all, both large and small, say prayers for Donahoe".
Paterson version

This bold undaunted highwayman, as you may understand,
Was banished for his natural life from Erin's happy land.
In Dublin City of renown, where his first breath he drew,
It's there they titled him the brave and bold Jack Donahoe.

He scarce had been a twelve-month on the Australian shore,
When he took to the highway, as oft he had before.
Brave Macnamara, Underwood, Webber and Walmsley too,
These were the four associates of bold Jack Donahoe.

As Jack and his companions roved out one afternoon,
Not thinking that the pains of death would overcome so soon,
To their surprise five horse police appeared all in their view,
And in quick time they did advance to take Jack Donahoe.

Come, come, you cowardly rascals, oh do not run away!
We'll fight them man to man, my boys, their number's only three;
For I'd rather range the bush around, like dingo or kangaroo,
Than work one hour for Government," said bold Jack Donahoe.

"Oh no," said cowardly Walmsley, "to that I won't agree;
I see they're still advancing us ~ their number's more than three.
And if we wait we'll be too late, the battle we will rue."
"Then begone from me, you cowardly dog," replied Jack Donahoe.

The Sergeant of the horse police discharged his carabine,
And called aloud to Donahoe "Will you fight or resign,"
"Resign, no, no! I never will, unto your cowardly crew,
For today I'll fight with all my might," cried bold Jack Donahoe.

The Sergeant then, in a hurry his party to divide,
Placed one to fire in front of him, and another on each side;
The Sergeant and the Corporal, they both fired too,
Till the fatal ball had pierced the heart of bold Jack Donahoe.

Six rounds he fought those horse police before the fatal ball,
Which pierced his heart with cruel smart, caused Donahoe to fall;
And as he closed his mournful eyes he bade this world adieu,
Saying, "Good people all, pray for the soul of poor Jack Donahoe".

There were Freincy, Grant, bold Robin Hood, Brennan and O'Hare;
With Donahoe this highwayman none of them could compare.
But now he's gone to Heaven, I hope, with saints and angels too
May the Lord have mercy on the soul of brave Jack Donahoe.