​The Opinions of Paddy Magee Lyrics And Chords

This Union song was written in 1861 and is set to the music of the jig "Paddy O'Carroll". The song talks about Magee's gratefulness for American aid during the famine, and the welcoming of the Irish during that period and he happily takes up his musket for his adopted homeland. He talks of Corcoran and Meagher, leading the Irish Brigade into battle, and of American resistance to British tyranny and recalls Washington's stand for freedom in 1776 and Jackson's in 1815. American folk and patriot songs . All credit goes to David Kincaid for collecting and recording the song on his album, "The Irish Volunteer", and for his dedication to the history of the Irish in America and for bringing to life their experiences through their songs.The chords as seen in the first verse are repeated as such throughout. I play the song with a capo on the 2nd fret (in the key of A) Guitar chords by Robert Morrow. More songs with Paddy used in the song title here include Paddy's Green Shamrock Lyrics And Chords by Paul Brady and another one called Paddy song by Gerry Carney,
[G] I'm Paddy Magee, sir, from [C] Ballinahee, sir,
[G] In an elegant [C] ship I come [D] over the [G] sea,
[G] Father Donahoe sent me, my [C] passage he lent me,
Sure, [G] only for [C] that, I'd have [D] walked all the [G] way!
He talked of [Em] America's [C] freedom and glory;
[G] "Begorra," says [Am] I, "that's the [C] country for [D] me!"
So, to [G] end a long [C] story, I've come now before you,
[G] To give the [C] opinions of [D] Paddy [G] Magee!

When Ireland was needing, and famine was feeding,
And thousands were dying for something to ate,
'Twas America's daughters that sent over the waters
The ships that were loaded with corn and wheat,
And Irishmen sure will forever remember,
The vessels that carried the flag of the free;
And the land that befriended, they'll die to defend it,
And that's the opinions of Paddy Magee!

John Bull, ye ould divil, you'd better keep civil!
Remember the story of 'Seventy-six,
When Washington glorious he slathered the Tories;
Away from Columbia you then cut your sticks.
And if once again you're inclined to be meddling,
There's a city that's called New Orleans, d'ye see,
Where Hickory Jackson he drove off the Saxon,
Now that's the opinions of Paddy Magee!

I'm sure none are bolder the musket to shoulder,
Enlisting to learn the soldering trade,
With Corcoran fighting, and Meagher delighting,
They swell up the ranks of the Irish Brigade.
With Columbia defying the bould British Lion,
The sons of ould Ireland forever shall be;
I'll have no intervention, if that's their intention,
And that's the opinions of Paddy Magee!

Though now we're in trouble, it's only a bubble,
We'll soon make the foes of the Union retire,
Foreign knaves that would meddle had better skedaddle,
For them Uncle Sam has a taste of Greek fire!
They'll find if they try it, Columbia's a giant,
And victory perched on the flag of the free,
For the American nation can wail all creation,
And that's the opinions of Paddy Magee!​
American Folk And Patriotic Songs
Guitar chords in the key of D Major 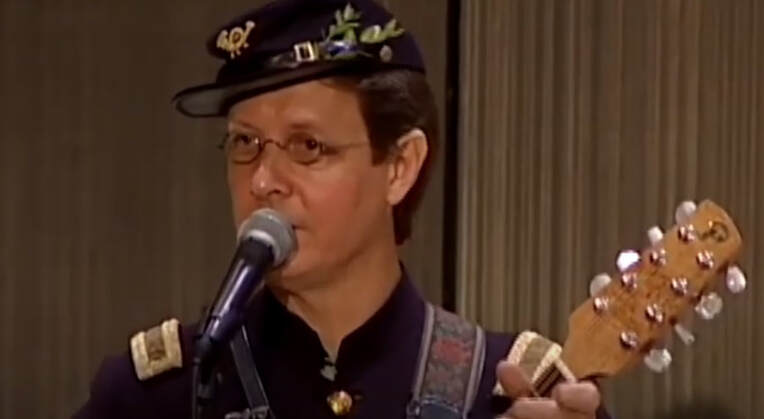