The Lakes Of Coolfin Lyrics And Chords

The Lakes Of Coolfin Lyrics And Easy Guitar Chords. Both pieces of sheet music can be played on the flute and accordion.Traditional, From around 1850 , The Grehan Sisters from the west of Ireland made this famous , Susan McCann does a lovely version as she does with all her songs including When The Sun Says Goodbye To The Mountains Song ,also Charlie And The Bhoys and The Barleycorn. The tin whistle sheet music is now included. The first set of guitar chords in chordpro are in D and also included are the chords in G Major. The lakes of Coolfin guitar tab in CGDA tuning now added..
The Lakes Of Coolfin Lyrics And Easy Guitar Chords

But Willie jumped in and he swum the lake round,
He soon reached an island, 'twas soft, boggy ground,
"Oh comrade, loyal comrade, don't follow me in
There are deep and false waters in the Lake of Coolfin."

It was very soon after, Willie's sister awoke
And unto her mother all sadly she spoke,
"Oh I dreamt a sad dream about Willie last night
He came to my room in a shroud of snow white."

Willie's mother arose, and she went to the lake,
She called her son's name, and she wept for his sake.
"Oh, sad was the hour when my Willie plunged in,
There are deep and false waters in the Lake of Coolfin."

Lakes Of Coolfin Words And chords for the key of G 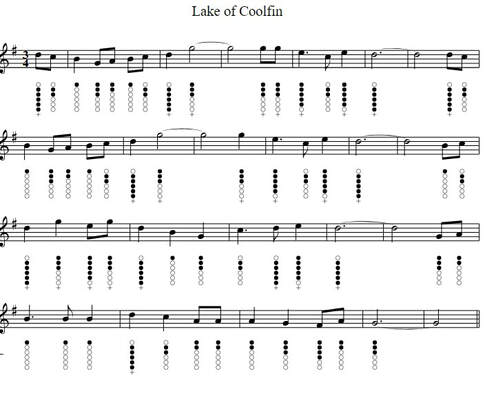