The tenor guitar tab is included in CGDA tuning.​An old song, first published with lyrics in Dublin in 1791. The air however was said to have been known in America since 1650 as 'Brighton Camp' and had been taken there by settlers from either England or Ireland. [ American Folk Song Lyrics ] The air became most well known as a marching tune of the Union Army during the American Civil War, although it was also used in the Confederate Army as well. Thanks to Robert Morrow for sending me The Girl I Left Behind Me. This song uses the same tune as '' The Waxies Dargle '' which is an old Dublin street song.
​[G] The dames of France are [C] fond and free,
And [G] Flemish lips are [D] willing,
And [G] soft the maids of [C] Italy,
And [D] Spanish eyes are [G] thrilling,
Still though I bask be[C]neath their [G] smile,
Their charms all fail to bind [D] me,
And my [G] heart falls back to [C] Erin's Isle,
To the [D] girl I left be[G]hind me!

She's as fair as Shannon's side,
And purer than it's water,
But she refused to be my bride,
Though many a year I sought her,
Yet since to France I sailed away,
Her letters oft remind me,
That I promised never to gain say,
The girl I left behind me!

She says, "My own dear love come home,
My friends are rich and many,
Or else abroad with you I'll roam,
A soldier stout as any,
If you'll not come not let me go,
I'll think you have resigned me",
My heart near broke when I answered "No",
To the girl I left behind me!

For never shall my true love brave,
A life of war and toiling,
And never as a skulking slave,
My native land be soiling,
But were it free or to be freed,
The battle close would find me,
To Ireland bound nor message need,
From the girl I left behind me!
Guitar chords for the key of D.
​[D] The dames of France are [G] fond and free,
And [D] Flemish lips are [A] willing,
And [D] soft the maids of [G] Italy,
And [A] Spanish eyes are [D] thrilling,
Still though I bask be[G]neath their [D] smile,
Their charms all fail to bind [A] me,
And my [D] heart falls back to [G] Erin's Isle,
To the [A] girl I left be[D]hind me!

And here's the chords for the key of C.

The Girl I Left Behind Me tin whistle notes 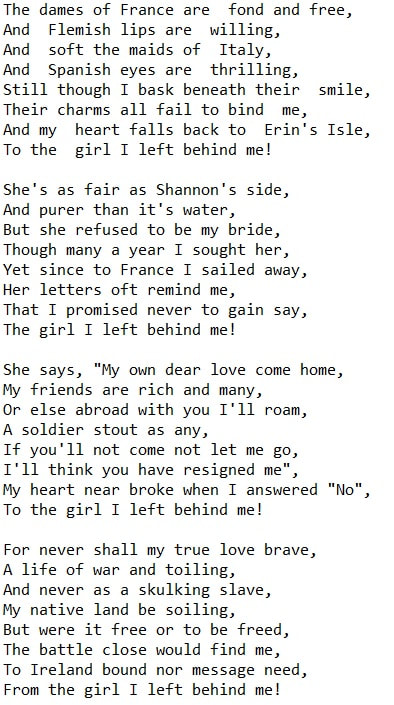 ​The girl I left behind me tenor guitar tab in CGDA