This song is about the famous monument that stood in Dublin's O'Connell Street of Lord Nelson. The guitar chords in C and G are in the chordpro format. The monument was blown up by the I.R.A in 1966 just before the 50th anniversary of the 1916 rising. Recorded by The Clancy Brothers with Tommy Makem and also by The Makem And Spain Brothers. Another song which was written about the same Nelson is Nelson's Farewell lyrics + chords which was a big hit for The Dubliners. The third song about Nelson was written and recorded by The Go Luck Four entitled Up Went Nelson, I hope to include that song soon. The tune for Lord Nelson is the same as The Sash Me Father Wore. The Sheet Music is included. The youtube video is by The Clancy Brothers And Tommy Makem.
Song Words / Chords In C


Well for many years, Lord Nelson stood and no one seemed to care
He'd squint at Dan O'Connell, who was standing right down there
He thought "The Irish like me or they wouldn't let me stay
That is except those blighters that they call the I.R.A."


Chorus
And then in 1966, on March the seventh day
A bloody great explosion made Lord Nelson rock and sway
He crashed and Dan O'Connell cried in woeful misery
"There are twice as many pigeons now will come and sit on me"
So remember brave lord Nelson boys, he had never known defeat
And for his reward, they blew him up in the middle of O'Connell Street
Lord Nelson Chords in the key of G 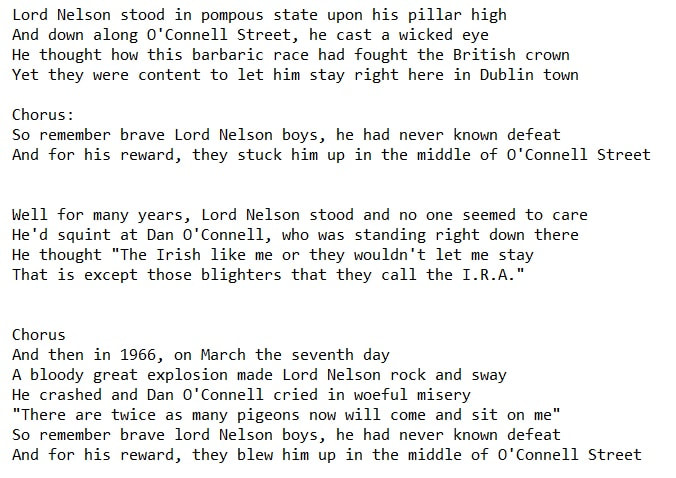 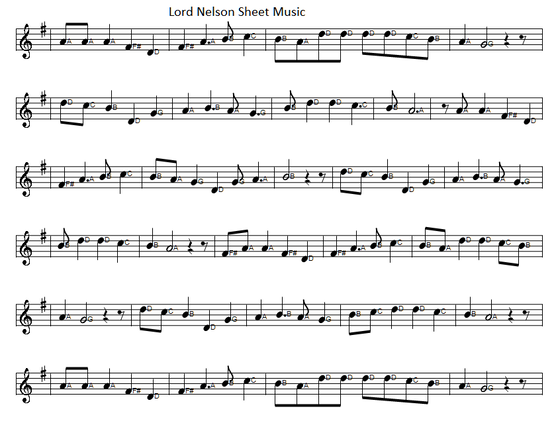