Peggy Seeger, recorded by The Dubliners with Luke Kelly on vocals. The first set of guitar chords are the easy one's and I have also included the Luke Kelly version which are much harder. The sheet music with letter notes are included. Peggy Seeger was the wife of another famous songwriter, Ewan McColl, who went on to give birth to a daughter called Kirsty, who also became a singer and songwriter, who went on to marry a music producer called Steve Lillywhite who done the music production on Fairytale Of New York song. Anyway that's enough rambling for me for one day.

The lifeboat Mona, which over the years had saved more than 100 lives, was lost answering a distress call from the North Carr lightship. She left Broughty Ferry at 3.13 a.m. in a full gale.

It is known she passed the dangerous bar of the Tay, but after that nothing further is known as to how her crew lost their lives, although it is certain she must have capsized. It was early the next day that a helicopter from R.A.F. Leuchars spotted the Mona stranded on the sands near Buddon Ness.

We all went down, but there was nothing we could do. The body of one man was lying on the sand a little way from the boat ... the sea rushing over him. There were four men in the wheelhouse and one in the engine room. The boat was flooded.

The wind it blows and the sea roar's up
Beats the land with mighty waves
At St.Andrew's bay the lightship fought
The sea until her moorings gave


The captain signalled to the shore
We must have help or we'll go down
From Broughty Ferry at two a.m
They sent the lifeboat Mona

Five lay drowned in the cabin there,
two were washed up on the shore
Eight men died when the boat capsized
and the eight is lost forever more.

Remember December fifty-nine
the howling wind and the driving rain
The men who leave the land behind
and the men who never see their homes again.
Here are the guitar chords as played by The Dubliners 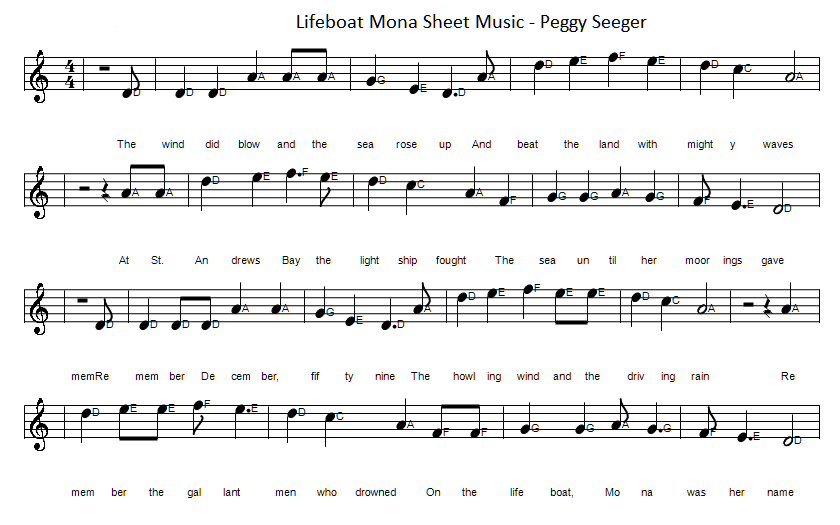