We visited McCann's, McIllmann's, Humpty Dan's, we then went in to Swann's our stomachs for to pack
We ordered out a feed which indeed we did need, and we finished it with speed but we still felt slack

Johnny McEldoo turned red, white and blue when a plate of Irish stew he soon put out of sight
He shouted out "Encore" [ lyrics ] with a roar for some more, that he never felt before such a keen appetite
He ordered eggs and ham, bread and jam, what a cram! But him we couldn't ram though we tried our level best
For everything we brought, cold or hot, mattered not, it went down him like a shot, but he still stood the test

He swallowed tripe and lard by the yard, we got scared, we thought it would go hard when the waiter brought the bill
We told him to give o'er, but he swore he could lower twice as much again and more before he had his fill
He nearly supped a trough full of broth says McGrath, "He'll devour the tablecloth if you don't hold him in"
When the waiter brought the charge, McEldoo felt so large, he began to scowl and barge and his blood went on fire

He began to curse and swear, tear his hair in despair, and to finish the affair called the shopman a liar
The shopman he drew out, and no doubt, he did clout, McEldoo he kicked about like an old football
He tattered all his clothes, broke his nose, I suppose he'd have killed him with a few blows in no time at all

McEldoo began to howl and to growl, by my sowl, he threw an empty bowl at the shopkeepers head
It struck poor Mickey Flynn, peeled the skin off his chin and the ructions did begin and we all fought and bled
The peelers did arrive, man alive, four or five, at us they made a drive for us all to march away
We paid for all the mate, that we ate, stood a trate, and went home to reminate on the spree that day 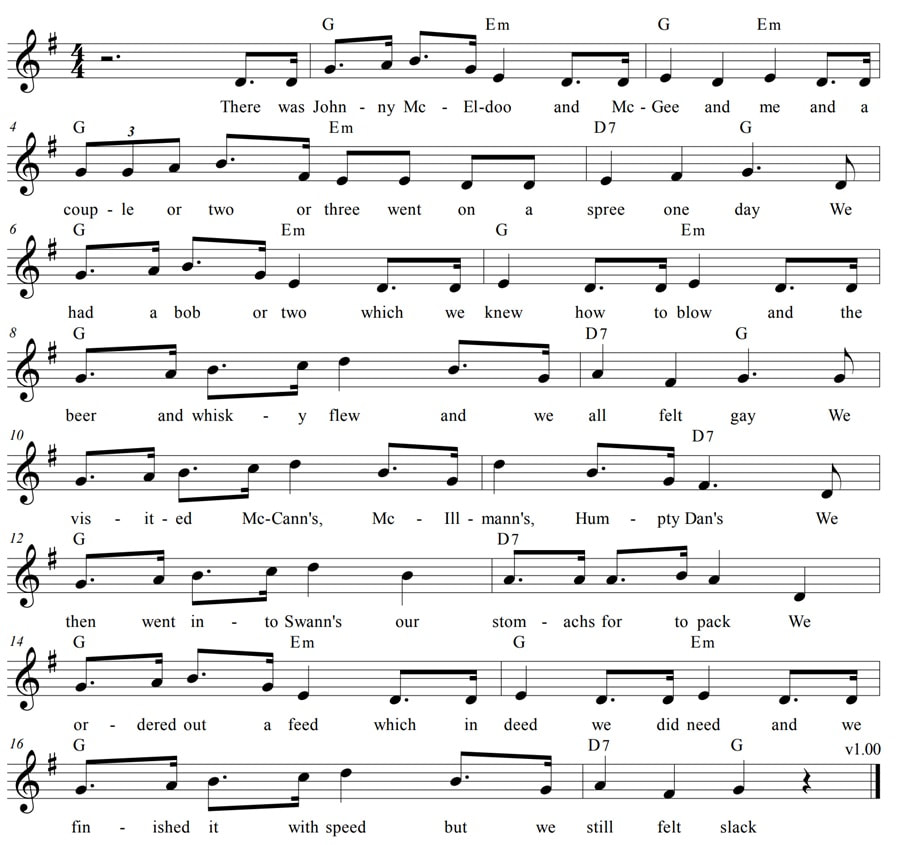