I Watch The Sunrise lyrics and guitar chords

I Watch The Sunrise Song Lyrics And Easy Guitar Chords. Irish singer Daniel O'Donnell recorded this song / hymn.The sheet music, which can be played on the flute in the key of D is included with the tin whistle notes. [ easy version ] Written by John Glynn The song is from the album Faith And Inspiration. I have given the guitar chords in a couple of different keys, Daniel O'Donnell sings the song in C #.. Also recorded by James Kilbane plus Michael English. The ukulele chords are included in the key of G and in chordpro.
The Song Words And Guitar Chords In G
.[G]I watch the sunrise
[Bm]Lighting the sky
[C]Casting its [G]shadows [D]near
[G]And on this morning –[Bm]bright though it be
I [C]feel those ]G]shadows [D]near [G]me.


I watch the sunset fading away,
lighting the clouds with sleep.
And as the evening closes its eyes,
I feel your presence near me.


I watch the sunset fading away,
lighting the clouds with sleep.
And as the evening closes its eyes,
I feel your presence near me.


I watch the moonlight guarding the night,
waiting till morning comes.
The air is silent earth is at rest -
only your peace is near me. yes, you are always near me.

Check out the Irish Country Lyrics section on this site for more of Daniel O'Donnell songs.
Ukulele Chord Shames Used In ''I Watch The Sunrise'' 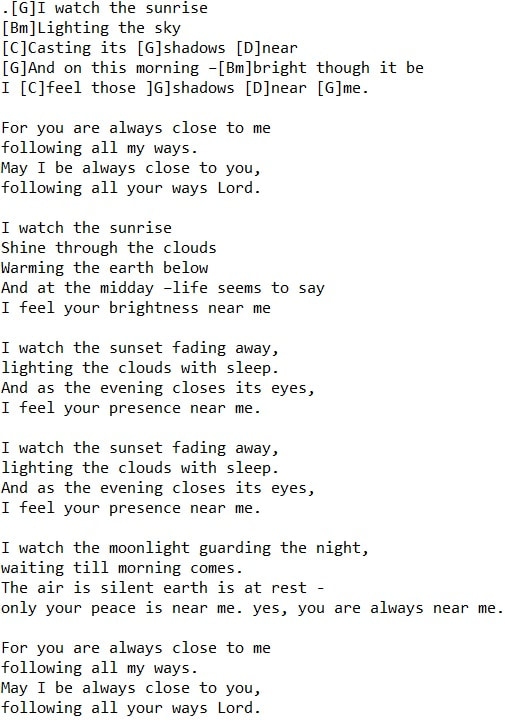 I watch the Sunrise sheet music and tin whistle notes 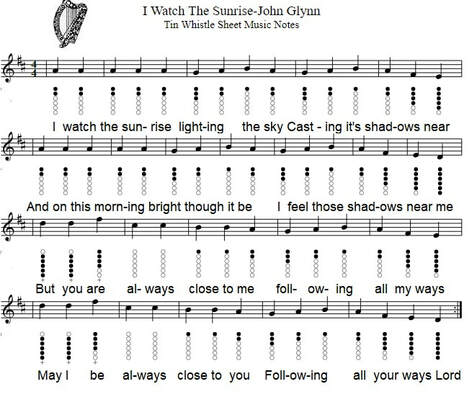 When I see what's all around us in this world, from stuff that's made of stone
like houses, to the metal and plastic that makes an Iphone and everything in-between,
I wonder at what makes some people beleive that the Earth came about because of pure chance. Why would intelligent people put their faith in scientists who recon
it's pure coincidence that humans ended up on a planet that had every possible thing at
their disposal, from stone, iron, rubber, timber and thousands of other natural resources we use
on a daily basic ? Everything you can think of from a simple bar of Chocolate,
to a Blood Pressure tablet to an aeroplan, comes from the earth.

The computer you're reading this is powered by Silicon Chips which come from the earth
in the form of small stones named Ingots - Did these ingots just happen to be on the
same planet as humans ? We could name millons of other products humans have used over
thousands of years and some non beleivers including very intelligent scientists would
say all these resources are here by chance. If you were to put these facts before a child
of about seven who has not being to school or influenced by modern day thinking
and asked them to choose if it's all a massive coincidence that all these usful products
just happen to be here or did God place them here for us to make use of in our development, I'm pretty certain the child would say God made the world and everything in it. That's also what I believe, that God made the world.

But not all scientiests are atheist, I recently watched a youtube video where the scientist
gave the chances of the building blocks of human existence comming together to form
life, these building blocks are some kind of amino acids [ I stand to be corrected on the Amino Acid term ] and he likened it the same chance of two grains of sand on all the beaches in the world coming together, it's possible but astronomical, and to suggest such a thing should be
ruled out because the chances are almost zero.

And why do they believe ? because it's being drummed into them from the time they start school. And it's pumped out in documentaries on television. They put it down peoples throat that humans came from the sea and then some other animal and on to a monkey and then a human. There is evidence all around us that man was created by God but they still pump out this nonsense that life just happened to happen by the coming together of amino acids.

Like the example of the child above, if adults had never heard of man coming from a monkey and at that moment gave them 'the theory of evolution' versus the story of God making the world, I think most would choose the fact that God made them. Most people are incapable of independent thought and generally talk and think about what they heard on the news or what someone spoke to them at work about. But if more people were capable of independent thought and really pressed upon their brain power they would surly dismiss the theory of evolution and turn to God. Martin Dardis 2017
Lovely words and melody.I play an instrumental of it on Pedal steel guitar.
Patrick.