God Save Ireland Tin / Penny Whistle Sheet Music. The easy letter notes are included for recorder or flute players. The Wolfe Tones recorded this. written by T. D' O'Sullivan 1867. This song was the unofficial national anthem before The Soldier's Song. If playing this tune on whistle the + sign means blow harder to reach the second octave, a # symbol means the note is too low for the whistle, try to fake. God Save Ireland Lyrics And Chords. This is one of the most popular songs / tunes to be heard in Ireland. Every summer during the Gaelic football season The Artane Band play this song before each game at Croke Park. The band have being playing it for generations and is one of their standard pieces to play each Sunday. Other songs played by the band include The Bold Fenian Men which is also on the site and is a little bit easier to play than this song.
Here are the easy to play letter notes for the sheet music above. All the c and f notes are sharp. The CAPITAL letters represent all the low notes up to the B. And all the small letters are the higher notes past the B. 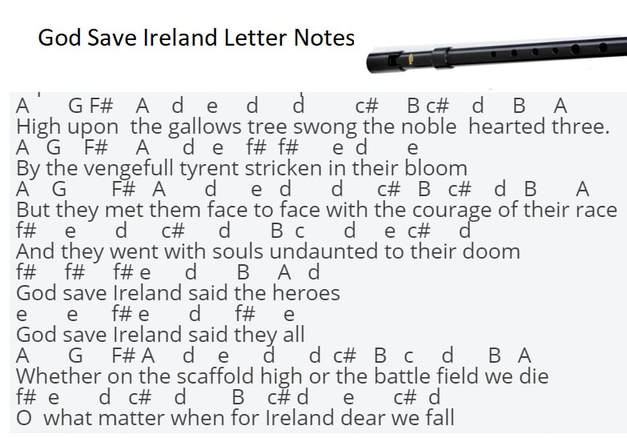 God save Ireland letter notes
Below are the basic letter notes in the key of C which is a step down from the sheet music above. If your learning this on piano / keyboard / accordion then it will be all white notes you'll be playing.