A traditional folk song, recorded by The Wolfe Tones and by The Clancys and Tommy Makem.Botany Bay Sheet Music . Botany Bay is south of Sydney, it's where James Cook landed in 1770. Recently recorded by Nathan Carter. The Blaggards, Noel McLoughlin and The Botany bay tenor guitar tab in CGDA​ is included.  Return to The Wolfe Tones Song Lyrics

[EmFare[G]well to your bricks and mortar, fare[C]well to your dirty[G] lime
Farewell to your gangers and gang[Em]planks and to[D] hell with your overtime
For the[G] good ship Raggamuffin is[C] lying at the[G] quay
For to[Em] take old Pat, with a shovel on his back
To the shores of Botany[G] Bay

I'm on my way down to the quay, where the ship and anchor lay
To command a gang of navvies that they told me to engage
I thought I would stop in for awhile before I went away
For to take a trip on an emigrant ship to the shores of Botany Bay
The boss comes up this morning and he says to me "hello
If you don't mix your mortar right, I'm afraid you'll have to go"
Well, since he did insult me, I demanded all my pay
And I told him straight I was going to emigrate to the shores of Botany Bay

And when I reach Australia, I'll go and dig for gold
There's plenty there for the digging up or so I have been told
Or else I'll go back to my trade and a hundred bricks I'll lay
Eight bob I'll lift for an eight hour shift on the shores of Botany Bay
Here are the guitar chords in the key of D.

[Bm]Fare[D]well to your bricks and mortar, fare[G]well to your dirty[D] lime
Farewell to your gangers and gang[Bm]planks and to[A] hell with your overtime
For the[D] good ship Raggamuffin is[G] lying at the[D] quay
For to[Bm] take old Pat, with a shovel on his back
To the shores of Botany[D] Bay

​The version of Botany bay tenor guitar tab in CGDA has alternative lyrics. 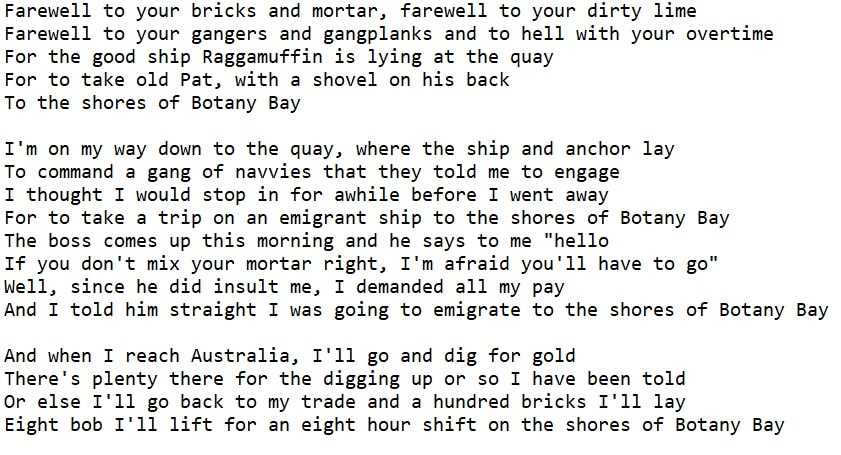