A Song For Ireland Lyrics And Chords

written by  Phil and June Colclough.The standard tenor guitar tab plus a version in CGDA Tuning now added. The 5 string banjo chords are included in the key of D Major. Made famous by The Dubliners with Luke Kelly on vocals also recorded by Mary Black, Dick Gaughan, Barleycorn, Donna Taggart and Clannad, and Irish folk singer Tommy Flemming to name a few . A timeless classic that never seems to age. I have included the guitar chords in several keys including the key that Luke and The Dubliners played the song in. The first version is very easy to play on guitar.
[D]Walking all the[A] day
By[G] tall towers where falcons build their[D] nests
In silver wings they[A] fly,  they[G] know the call for freedom in their[D] breasts,
[G] saw Black Head against the[D] sky
With twisted rocks that run down to the[A] sea
[G]Living on your Western[D] shore,
Saw summer sunsets, I asked for[A] more,
I[G] stood by your[D] Atlantic[A] Sea,
And [G]sang a song for[D]Ireland

Drinking all the day,
In old pubs where fiddlers love to play,
Saw one take the bow,
To play a reel that was so grand and gay,
I stood on Dingle Beach and cast,
In the wild foam for the Atlantic bass,
When living on your Western shore,
Saw the summer sunset, I asked form more,
I stood by your Atlantic Sea,
And sang a song for Ireland

Talking all the day,
With true friends who try to make you stay,
Telling jokes and news,
And singing songs to pass the night away,
We watched the Galway salmon run,
Like silver dancing, darting in the sun,
When living on your Western shore,
Saw the summer sunset, I asked for more,
I stood by your Atlantic Sea,
And sang a song for Ireland

Dreaming in the night,
I saw a land where no man had to fight,
And waking in your dawn,
I saw you crying in the morning light,
Lying where the falcons fly,
They twist and turn all in your air-blue sky,
Living on your western shore,
Saw the summer sunset, I asked no more,
I stood by your Atlantic sea,
And sang a song for Ireland

​Below is the ebook list of Irish Folk Songs with guitar chords
in 3 keys. Price €8.90 and I'll email the ebook after purchase .
​The chords are suited to ukulele, banjo or mandolin also
Martin
Below is the standard sheet music in G Major 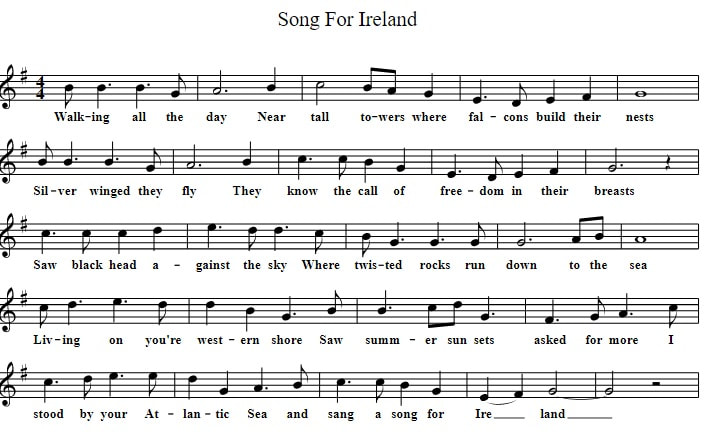 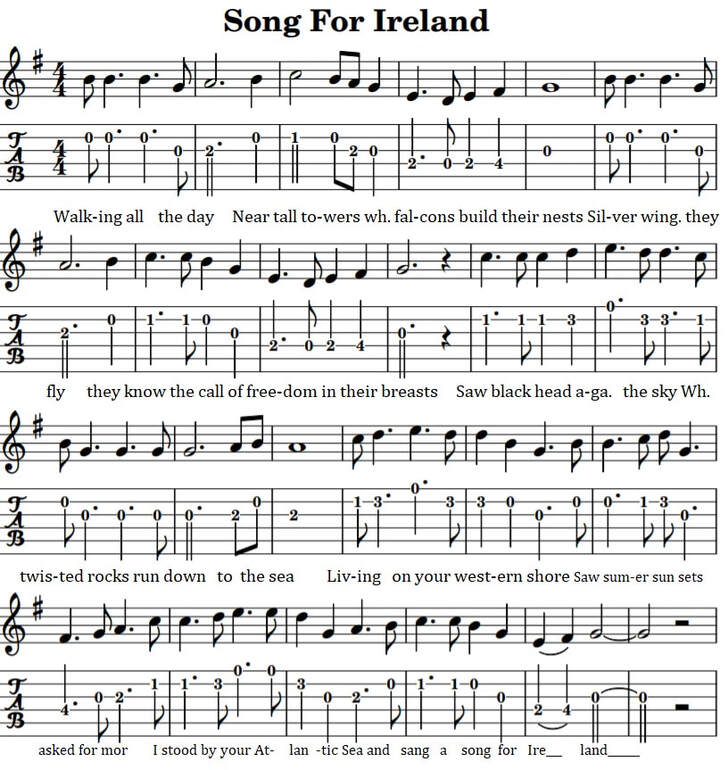 5 String banjo chords for A Song For Ireland in D Major.

SONG FOR IRELAND 4/4 guitar chords in the key of D Major but with added chords to make it sound more interesting.

Chorus
[F]Living on your [C]Western[Am] shore,
Saw summer [C]sunsets, [F]asked for[G] more,
I[F] stood by your[C] Atlantic[G] Sea,
And [F]sang a [C]song for[F]Ir[G]e[C]land
The youtube video is of myself [Martin Dardis] and the chords I use are the same as what's on the page, key of D Major. Tin Whistle Notes For A Song For Ireland

From Sarah Colclough
I am Phil and June Colclough's daughter. My parent's both wrote this song. Tragically my mother died prematurely at 63 only 3 years ago. My parents were both from North Staffordshire not Canada. My father's family have Irish connections in County Wexford. My parents helped to set up the first folk club in Stoke-Trent in 1960 and in 1966 they left Stoke for London. My father joined Ewan Macoll's Critics Group. Back in Staffordshire in 1970's my parents ran folk clubs and produced a folk based radio programme for the BBC Radio Stoke. Song for Ireland was indeed inspired by a holiday my parents took in visiting the Dingle Peninsula. It has been recorded by Joan Baez, Mary Black, The Dubliners and Englebert Humperdinck.
Another song written by my parents which I think is fantastic is called The Call and The Answer. My parents spent much of their lives working in Education as teachers and education advisers. My Dad has left North Staffordshire and is hoping to resume a musical life at some point.
http://mudcat.org/thread.cfm?threadid=105550&messages=31