The mandolin / banjo sheet music tab is included. The sheet music time signature is 12/8 .Written by Shane MacGowan and recorded by The Pogues. These are the basic lead notes, the first part of the video just gives the lead and the second part gives the bass run. Where I marked the Ch means that that is a high C as there are lower ones also. The pogues also play this song in the key of C Major. The whistle tab is in the key of D with the first line being that little riff at the start of the song. Piano letter notes included for right hand. A Rainy Night In Soho lyrics and chords is also on the site.The PoguestrA also play this tune in the key of C Major, the same as The Pogues.

A rainy night in Soho sheet music for tin whistle

A Rainy Night In Soho Beginner Piano Notes In C 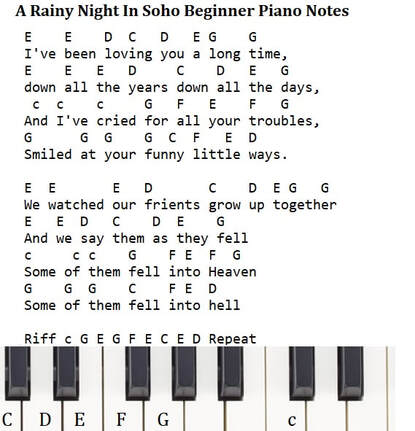 A rainy night in Soho mandolin tab
The youtube video above uses the same notes that are here. Here's the letter notes for those who don't read the tabs. The lower case letters are the high notes. Don't forget about the intro. as it really adds a lot to the tune. If
playing a recorder use these notes.